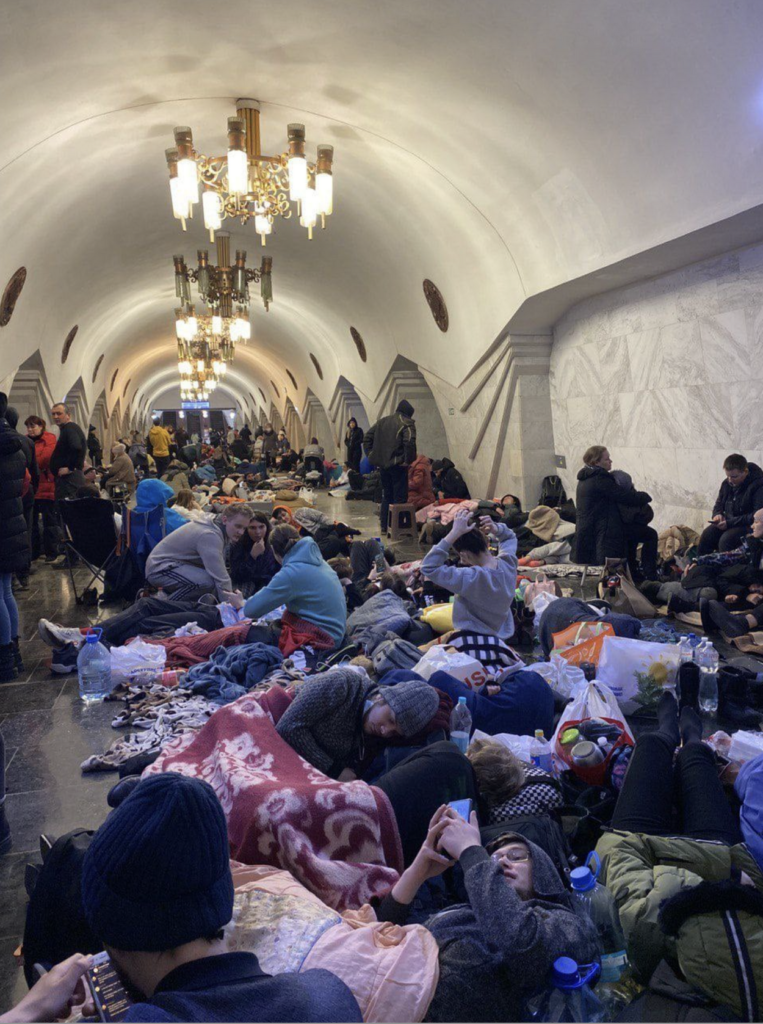 Russia’s invasion of Ukraine has begun. The world press is full of publications about it. Here are some quotes from New York Times:

“President Vladimir Putin called on Ukrainian soldiers to put down their arms. He said that those who try to interfere with Russia’s actions ‘must know that Russia’s answer will be immediate, and will lead to such consequences as you never experienced in your history.’ ”

Troops of the Donetsk People’s Republic announced the capture of the Ukrainian city of Mariupol. According to them the city of Kherson was also taken.

“Mariupol is ours. Kherson is ours,” writes the telegram channel “Insider Donetsk”.

The operation of 12 airports in the south of Russia has been suspended. According to RIA Novosti with reference to the press service of the Federal Air Transport Agency, flight restrictions will be in effect until 03:45 on March 2. More than 200 flights are delayed or canceled at Moscow airports. Such data is provided by the popular website Yandex.

On the Russian state TV, propagandists have been celebrating their victory since Monday, since Putin’s aggressive speech.

“Firstly, I don’t understand why there is no champagne in the studio!”

“I said right away: it will be after the broadcast.”

“Secondly, I don’t understand why you stand so calm… And I feel emotions close to euphoria, which are very difficult for me to restrain. Because, you know, Vladimir, I’ve been waiting for this for eight years. And this happened today. And this real happiness! I want to scream directly: ‘Ros-si-ya! Ros-si-ya!’ ”

“What has happened in recent days in practical terms? It seems to be nothing. Only the most stupid and naive could believe that the LPR and DPR republics were created and existed all these years through the efforts of local residents who rebelled against the ‘Kyiv junta’. It was clear to everyone else from the very beginning that these territories arose and existed precisely as zones of Russian occupation in the East of Ukraine, and the interchangeable Pushilins (S.T: a name of one of the rebellious Donbas leaders) seemed to look and behave in such a way that they did not even seem to be real power.

“The idea that Russia will be forced to maintain two more territories is only capable of impressing those who have not followed the news. And at whose expense did all these malignant geopolitical formations live all these years? They lived at the expense of Russia, so nothing new will happen – well, except that the inhabitants of Russia itself will now have to tighten their belts a little more because of the dubious pleasure of keeping ‘Pushilins’ will rise in price a little due to new sanctions.

“In a practical sense, the history of the notorious ‘Minsk agreements’ has ended, that is, that is. But, frankly, from the very beginning, they were written in such a way that they could never earn money. Their whole point, in essence, consisted of the fact that the actual occupation of the part of the Ukrainian territory did not look like that and the appearance was, that Donetsk and Lugansk were still Ukraine, and even Russia always declared that this was the case – it’s just that the local residents there did not want to live without a special status and are afraid of the Ukrainian genocide, which has allegedly been raging in the rest of Ukraine for 8 years.

“So, it seems that nothing radically new has happened – but does this mean that in fact, nothing has changed? Alas, a lot has actually changed. By his personal decision, Putin set the vector of Russia’s movement for years to come. The destinies of millions of people, the Russian economy, and its future have been essentially sacrificed to the thirst for power of one specific person. A separate and big question is how international law will continue to exist after the same person trampled it in the most arrogant way twice in the course of a decade in relation to the same country.

“All the years of his reign, as it is now completely clear, Vladimir Putin dreamed of recreating the USSR – and not so much its external borders, economic model, and aesthetics, but the functioning of power in it. Therefore, he cannot be considered so naive that he was in all seriousness going to return the Baltic countries to the Kremlin, for example. To some extent, his claims are quite realistic – in his internal logic, of course.”

Facebook is full of emotional statements. Some of them are similar to state TV speeches, some are completely opposite.

A painter in St. Petersburg:

“It’s all truly awful! But how long did the entire ‘civilized world’ endure these abuses? I mean, Ukraine, like a person tied to a battery with handcuffs and tortured. And this is done by a bunch of scoundrels who have scared their own people to death. And the whole world is watching and repeating all the time: ‘Our patience is not limitless!’

“And maniacs and serial killers laugh to the face of this world. Well, after all, it was necessary to react earlier, wasn’t it clear that the ordinary Russians are intimidated, afraid of prisons and repressions, that they themselves will not start fighting these creatures in power?

“Ukraine was simply thrown into the monster’s mouth like in fairy tales, where the monster had to feed by the beauties … And it was clear that the monsters do not stop by themselves!

“Now there is a terrible situation for everyone who has even a little bit of a conscience. It’s embarrassing and painful.”

“That night happened the most terrible and shameful event, at least in my entire life. The President of my country has declared war on Ukraine. Never in my life, by word or deed, have I supported Putin’s power, never voted for him. Despite this, I am infinitely ashamed and ill.

“Dear Ukrainians, I know that none of you care about such individual voices right now, but all my thoughts are with you. If I knew how to pray, I would write ‘prayers’. But I can’t. Probably, for the first time in my life, I experience such confusion from the blackness of evil, in the epicenter of which we are all right now. And it is not clear what / who to hope for.

A Ukrainian immigrant in New York:

“In today’s NY Times, Thomas Friedman argues that NATO’s eastward expansion was a political mistake and posed a threat to Russia, which was building democracy in the 1990s. They say the cold war was over and Russia did not threaten anyone.

“Friedman views what is happening today as a consequence of the bad policies of the Clinton administration. Strange logic. As in my opinion, given that for more than twenty years Russia has been headed by a man who believes that the collapse of the USSR was the greatest geopolitical tragedy, and not at all a possibility for the democratic development of all fifteen republics, including Russia.

“I think if it were not for the expansion of NATO in the nineties, the Baltic countries would have been annexed long ago.” 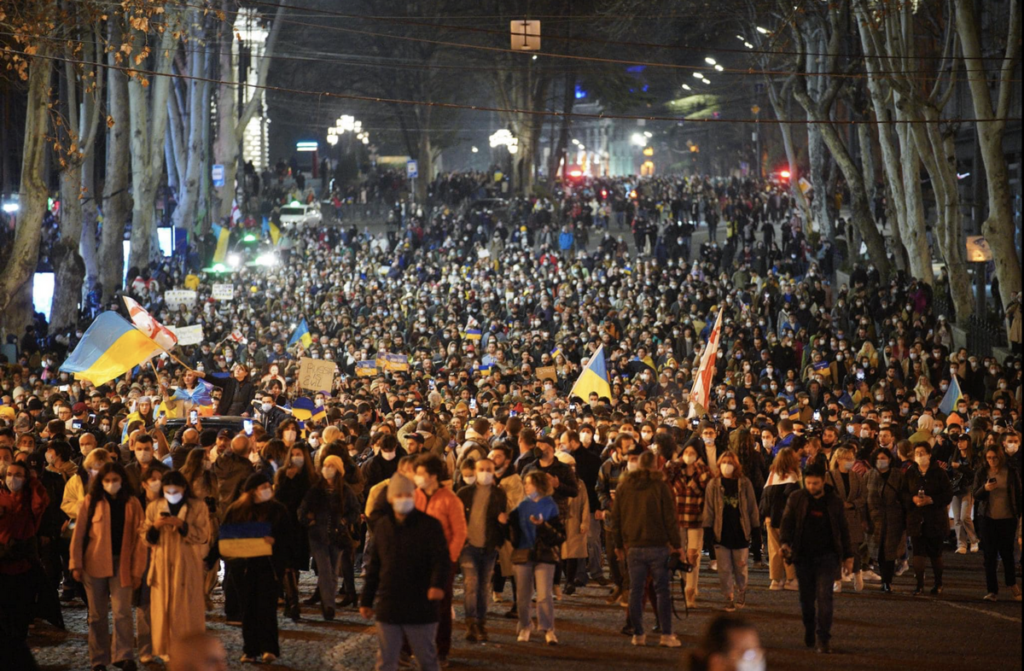 The meeting in support of Ukraine in Tbilisi, capital of Georgia.