Editor’s note: The following is an excerpt from Bill Keisling’s forthcoming book on  Pennsylvania government, business and media.

Philadelphia DA Seth Williams, a Democrat who had hired Fina and several other prosecutors from Corbett’s AG’s office, rushed into the mud fight and publicly offered to prosecute the subjects of the Ali sting that Kane had declined to charge. 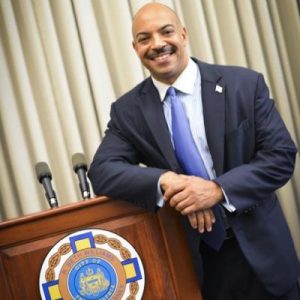 DA Williams’ insertion of himself into the controversy only further muddied the waters, and would ultimately help bring about the end to Williams’ own career, and perhaps even the filing of federal criminal charges against him.

By grandstanding and demanding the opportunity to prosecute the Ali case, Williams set off a cascading series of improbable events.

DA Williams was forced to defend the integrity and trustworthiness of informant Ali, who AG Corbett’s office had charged with 2,088 criminal counts for allegedly stealing $430,000 from a federally funded state program meant to feed the elderly and the poor.

“You have repeatedly asserted it was the previous prosecutors who dropped charges against (Ali),” DA Williams for example wrote Kane in a letter that was quickly leaked to the Inquirer, “when in fact it appears that it was you who did so, and then sealed the proceedings to keep them from public scrutiny.”

In early April 2014 AG Kane wrote a letter to DA Williams (this letter was also leaked to the Inquirer) that she welcomed “any law enforcement agency interested in taking this case to do so…. I invite you to contact our office to set up a time to accept the evidence.”

Former Philadelphia traffic court Judge Thomasine Tynes pleaded guilty in 2014 and was jailed for her role in this scandal, as well as a separate traffic court ticket fixing scandal.

So although Williams boasted of convictions, all but one defendant pleaded guilty or accepted plea deals.

Another target of Ali’s, State Rep. Vanessa Lowery Brown, pleaded not guilty. Her case continued to drag on into 2017.

These cases however took a toll on Williams’ own career and his standing in Philadelphia’s African American community.

Prosecuting these defendants, “ultimately revealed itself to be a self-inflicted wound that marked the beginning of the end for Williams’ career,” the Legal Intelligencer posited. “The move alienated a large swath of Williams’ supporters in the black community, as many of the defendants were beloved and highly influential.”

Matters soon moved from bad to worse for DA Williams. In 2015 a cache of Fina’s off-color emails was released by the state Supreme Court. The National Organization of Woman and other groups demanded that Williams fire Fina for the emails, which Williams declined to do. By May 2016, under continued pressure, DA Williams announced that Fina and two other prosecutors caught up in the pornographic email scandal would undergo a day of “sensitivity training.” This only enflamed others, like Philadelphia councilwoman Cindy Bass.

Fina, in the end, was quietly let go as a prosecutor and went into private law practice.

The worse was yet to come for DA Williams.

Williams was indicted by the feds in March 2017 on a 23-count indictment for seeking gifts and bribes, and selling influence from defendants facing charges before his office. Federal prosecutors filed additional fraud charges against him in May 2017, stemming from his alleged personal use of a government vehicle and campaign funds.

Williams was stripped of his law license, and put on trial in June 2017.

At trial, two wealthy businessmen testified that they gave DA Williams gifts including travel, luxury goods and cash in return for legal favors. Williams promised to “look into” their cases.

Williams was also accused of misspending thousands of dollars of his campaign funds on memberships to Philadelphia social clubs, misusing city vehicles, and misappropriating money intended to fund his mother’s nursing home care.

In late 2015 Williams’ own PAC accused Kane of leaking the news that Williams was the subject of federal investigation. Williams’ supporters later accused Kane of initiating the federal prosecution against him.

Seth Williams, like Kathleen Kane, was once a rising star in Pennsylvania politics. Williams had expressed interest in running for the U.S. Senate, or even running to replace Kane as attorney general.

On June 29, 2017, Williams abruptly pleaded guilty in the middle of his corruption trial.

“I have a guilty plea from the highest law officer in the city that he betrayed his office and he sold his office,” U.S. District Court Judge Paul S. Diamond told the courtroom. “I am appalled by the evidence that I heard. …I simply do not credit this defendant’s testimony. I do not believe him.”

DA Williams resigned on the spot, in front of the judge. Judge Diamond nevertheless ordered him handcuffed and taken to jail until his sentencing months later, in October.

If he wasn’t already afraid, Seth Williams certainly had to be afraid as he faced the judge’s wrath and was led away in handcuffs to federal prison.

Some suggested that Kathleen Kane and Seth Williams harmed each other by publicly trading blows.

“The two of them in battling one another essentially ended up with a form of mutually assured destruction,” the Legal Intelligencer quoted a Philadelphia defense attorney.

But the more meaningful moral may be that Pennsylvania politics is so dirty, and so corrupted, that anyone rocking the boat or sticking his or her chin out risks personal destruction.

And so everyone goes along.