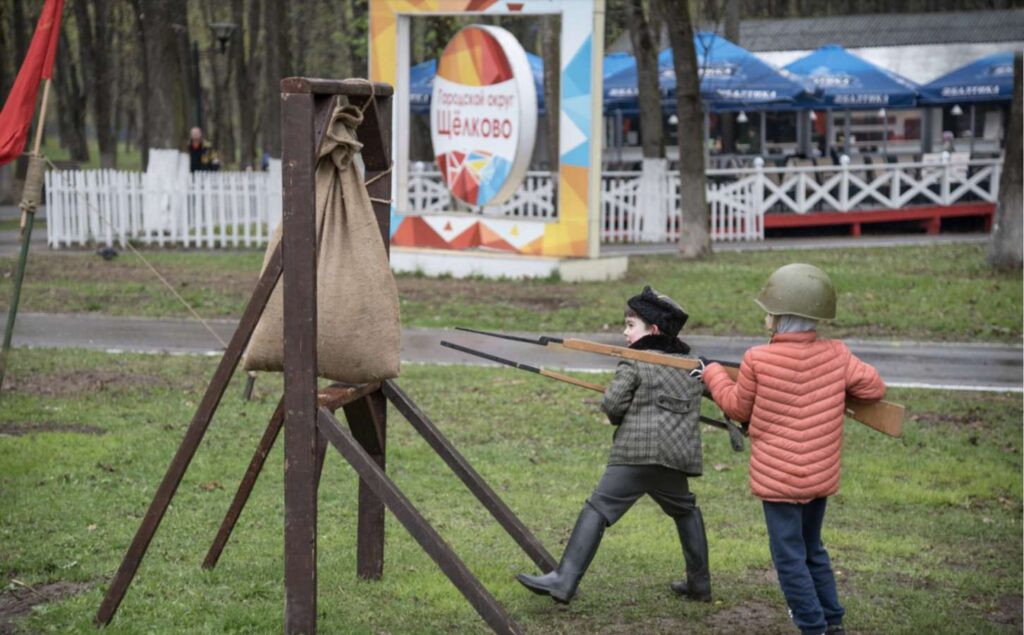 Children’s playground in a town near Moscow today.

The Internet is full of documents proving the violent attitude of the Russian military and even some Russian civilians toward Ukrainians. One especially outrageous document, which went viral on the Russian Internet, was a recording of a telephone conversation between a Russian soldier, who was fighting in Ukraine with his wife located in a Russian city near the Ukrainian border, where some Ukrainian refugees were forcibly placed.

How Ukrainians got there? Here is an excerpt from an article in Washington Post, which explains the situation of the Ukrainian refugees in Russia:

“At least 1 million Ukrainian civilians have fled the fighting into Russia, according to Russian Defense Ministry numbers that the Ukrainian government also accepts as valid. In many cases, especially in the devastated city of Mariupol, residents were effectively forced into Russia with no option to seek refuge on friendlier soil. In other cases, especially in the breakaway territories of eastern Ukraine, the travel to Russia was voluntary.

“Almost everyone has had to pass through ‘filtration camps,’ a perilous process in which Ukrainians are strip-searched and interrogated. People suspected of having sympathies to the Ukrainian military are being detained and tortured, according to refugees, representatives of volunteer organizations, and Ukrainian and U.S. officials.”

The conversation between the Russian soldier and his wife was recorded by the Security Service of Ukraine.

The wife was outraged that Ukrainian children refused to draw symbols for the Russian celebration of WW2 Victory Day:

“If I worked in this camp I would inject these children with poison drugs, then I would look into their eyes and say to them: ‘Die, suffer.’ I would cut off their pee-pees, cut out the stars on their backs, I would cut off their ears, their fingers, one by one every day, so that they would be hurt more.”

The wife’s words shocked even her soldier-husband, she is obviously not an ordinary, typical Russian, but her attitude is built on the base of the very widely spread Russian official propaganda, presenting Ukrainians as “Nazis”, as almost nonhuman.

Anne Applebaum in her article in The Atlantic magazine describes this situation:

“Within the ever-changing drama of anger and fear that unfolds every night on the Russian evening news, Ukraine has long played a special role. In Russian propaganda, Ukraine is a fake country, one without history or legitimacy, a place that is, in the words of Putin himself, nothing more than the ‘southwest’ of Russia, an inalienable part of Russia’s ‘history, culture and spiritual space.’

“Worse, Putin says, this fake state has been weaponized by the degenerate, dying Western powers into a hostile ‘anti-Russia.’ The Russian president has described Ukraine as ‘fully controlled from the outside’ and as ‘a colony with a puppet regime.’ He invaded Ukraine, he has said, in order to defend Russia ‘from those who have taken Ukraine hostage and are trying to use it against our country and our people.’

“In truth, Putin invaded Ukraine in order to turn it into a colony with a puppet regime himself, because he cannot conceive of it ever being anything else. His KGB-influenced imagination does not allow for the possibility of authentic politics, grassroots movements, even public opinion. In Putin’s language, and in the language of most Russian television commentators, the Ukrainians have no agency. They can’t make choices for themselves. They can’t elect a government for themselves. They aren’t even human—they are ‘Nazis.’”

Recently a member of the State Duma of the Russian Federation, chairman of the Rodina (Motherland) political party Aleksey Zhuravlev said in his speech, widely quoted by media, that Russia will not stop until it reaches the border of Poland.

“It will no longer be possible to turn Ukraine into anti-Russia, as the West has been trying to do for the past 30 years.

“Two million Ukrainians must be ‘denazified’, that is, killed”.

Two million is about five percent of the population of Ukraine.

Oleg Matveychev, a political scientist and deputy head of the State Duma Committee on Information Policy, Technologies and Communications, in his interview with RIA Novosty expressed an opinion that the Russian confrontation with the United States, which has entered an acute phase in Ukraine, will end with a complete victory for Russia, followed by a global redivision of the world. According to Matveychev, Europe will be the first to suffer in this global war, where population riots can be expected in the near future.

“The war is being waged with America, which has captured the historical territory of Russia – Ukraine. Roughly speaking, if compared with 1941, Hitler is modern America, the United States did not reach Moscow, but Donetsk, and used the population of Ukraine. The resources of all of Europe, as under Hitler, work, so to speak, for the Reich. All these forces are completely united – they all are helping the cause – informationally, economically with the sanctions, and now by military means. Their military participation is the weakest. They are not ready to suffer losses – they are only ready to throw Slavs, that is, Ukrainians, whom they zombified, into the slaughter against other Slavs. That’s all they could do from a military point of view.”

Here are excerpts of an article of Alexander Prokhanov, a popular writer, the author of more than 30 novels and short story collections, the editor-in-chief of Russia’s extreme-right newspaper Zavtra. The article was published May 12, 2022 on the site of the Izborsk Club, created by Prokhanov, in order to unite all the anti-liberal intellectuals of Russia.

“Why is the Azov battalion fighting for the third month surrounded in the catacombs of Azovstal, not wanting to surrender, preferring death to captivity? What strength, passion and faith keep the Azov people at the firing points? Perhaps they are dying for Ukraine to enter Europe? Enter this sleek, prosperous, well-fed world, enchanted with its own well-being? Or are they fighting for a European, democratic, liberal Ukraine, where freedom of speech reigns and human rights are respected?

“Let’s not be mistaken, let’s not build illusions. They fight for the sky, for their black Nazi sky, where their Nazi black gods live. The gloomy underworld with the Nibelungs, the Valkyries, the gold of the Rhine, Siegfried came to the surface, rose up and became the black sky of Nazism. The soldiers of Azov are not the children of oligarchs, they are not refined intellectuals, they are not liberal-minded youth plankton. They are commoners, workers, people of labor, grown up among dull earthly worries, burdened with the hardships of life, painfully obtaining bread, doomed to everyday dull life. And suddenly preachers appeared among them, who distracted them from their dull existence and began to talk about the sublime, about the sky – about the black sky of Nazism. And these dim people became celestials, became Nibelungs, became heroes of the Rhine oak forests. They were told that they are the best on earth, they are brave, noble, chosen ones. They are fighting for a great country, where, in addition to Lvov, the Left Bank and the Right Bank, in addition to the Donbass and Crimea, the Russian lands of Kuban, the Don Army, Belgorod, Kursk and Voronezh are included.

“This country has a religion – mysterious and majestic, like the music of Wagner. It has its own mysterious art – runic, covering with its symbols not canvases and paper, but the human breathing body. And these people with Russian and Ukrainian surnames burn Russian tanks with American Javelins, and send Turkish Bayraktars to the positions of the Donetsk militia.

“We are at war in Ukraine not with liberal Europe with its mixed marriages and pernicious art. We are at war with Nazism in its current technotronic incarnation. They do not look to Europe, but Europe looks at them as their favorite offspring, which is fed from the nipples of European liberalism in order to cut down its progenitor in time. Liberal Europe is throwing off its cover, under which the swastika slowly and inevitably emerges, the one that in the film Leni Riefenstahl spun her torch carousels in Nuremberg.

“Europe is Nazified after Ukraine. And today we are at war with a grandiose Nazi beast that grows on its steel clawed paws and scrapes the decayed shells of the world with alloyed claws.

“What idea can Russia set today against the Nazi idea? The only force that overcame and defeated Nazism in the 20th century was the Soviet Union. Under the volleys of the Soviet Katyushas and the thunder of the T-34-ok, the black Nazi sky curled up into a scroll and burned down, giving way to the scarlet Soviet sky. The idea of ​​a luminous, just fraternal humanity has overcome the idea of ​​hatred and bloody domination.

“Today’s Russia is shaking off the dandruff of Yeltsinism, the scabs of liberal eczema. And the deep, eternal victorious feeling of the Russian sky, the luminous Russian azure, the aspiration of a just, delightful immortal being, which was bequeathed to us by our ancient ancestors: the Magi, Orthodox mystics, Russian cosmists, the Golden and Silver Ages, the fierce Soviet dream. This Russian aspiration, this age-old Russian Dream controls hypersonic ‘Daggers’ and ‘Caliber’ today, leads Russian paratroopers and tankers into battle, inspires the incomparable and heroic militias of Donbass. This ideology, which has not yet been fully manifested, does not have its heralds, its artists and singers, is already present in today’s Russian people. The people who praise the creator with the words ‘Glory to you, Lord!’ and ‘Allah Akbar!’ This is the ideology of Victory, the ideology of the great battle and great overcoming, and Russia is once again taking on a terrible burden that is unbearable for other peoples – it is breaking the back of the Nazi beast.

Russian official propaganda eagerly spreads such attitudes. Of course in the independent Russian Internet the anti-war democratic point of view, similar to Western one, prevails. But even there one can find comments like this one:

“Russia is a great power! So it was and always will be! We are Russians! God is with us! And the Devil is with them.”