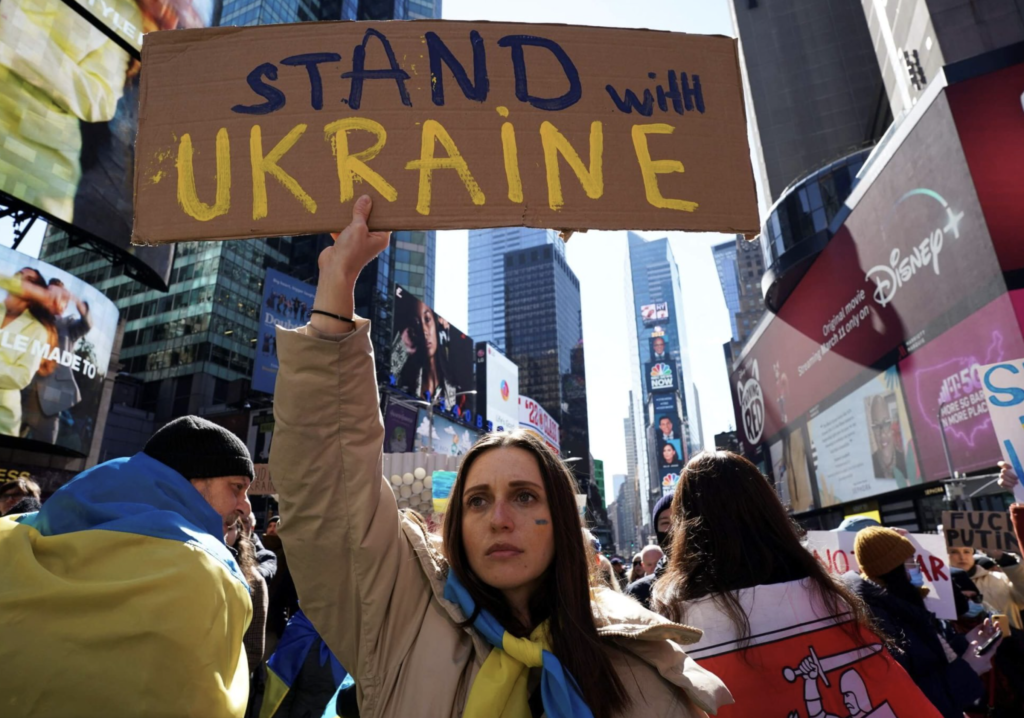 Rally in support of Ukraine in Time Square. American Russians and American Ukrainians rally together.

March 2014 was a time when Russia annexed Crimea and started the war in Eastern Ukraine. Russians in Russia and even Americans, who had emigrated to the US from this country, were divided in their attitude to those events.

An article in New York Times, published on March 2, 2014, was entitled “Action by Russia Divides Immigrants in New York”.

Just several weeks ago this Russian community was violently divided in their attitudes to Donald Trump and Democrats. Brothers and sisters, parents and children were fighting with each other over politics. However Putin’s aggression caused the community to forget about American political problems and to unite.

Formerly in the USA all immigrants from the former Soviet Union usually were called “Russians” since they all spoke Russian. They felt their unity. I would never have investigated whether my Russian-speaking American friend came from Russia or Ukraine or his / her ethnic roots were Russian, Ukrainian or Jewish. Now, reading the posts of some of my Facebook friends, I discover their roots.

Here are typical posts of a Jewish filmmaker, who immigrated to New York from Kyiv years ago. Till now he never had shown any difference from those friends who came from Russia, rather than from Ukraine. And now all Facebook friends, who came from Russia seem to share his Ukrainian feeling. Here are his posts:

“In the morning, as usual, I made coffee.

“And not without a surprise, I heard – as if awake – I count the spoons in Ukrainian.

“Like every citizen of Kyiv, even if I don’t speak Ukrainian, I understand it, and it lives in me with the music that I feel.

“And this inner ‘Ukrainian I’ came up, rose from the depths of my consciousness, found its way into the breath, into the lips, into the language…

“It demanded that I hear it.

“And I realized that I was crying.

“From the horror of Bucha, Borodyanka, from the boy who brings canned food to the grave of his mother, who died of starvation, from the photograph of a three-year-old girl, on whose naked back her mother wrote her name and the phone number of someone close.

“From the last words of a dying child ‘Mom, I behaved well, why I’m so much in pain?’

“A couple of days ago, I wrote that war teaches that hatred is endless. And it is.

“But war also teaches the infinity of love.

“And in this account of coffee spoons in Ukrainian, my “I” tells me about my love… about love for Kyiv, for my relatives, for friends, for the Kyiv Lavra [ancient monastery S.Ts.], for the bell tower that I’ve known all my life…

“And on the last spoon I said:

This title doesn’t seem to be appropriate since the author, Willy Lowry, found no supporters for the Putin’s war in Brighton Beach, the borough of Brooklyn, home to the highest concentration of Russian-speaking immigrants in the USA.

“Whatever the situation in Eastern Europe, over the decades, the community has become united, with residents defining themselves not by their countries of origin but by their use of the Russian language.”

Lowry interviewed “Michael Levitis, who immigrated to the neighborhood from Moscow when he was 12, and now hosts a popular local radio show, broadcast in Russian.”

“I have a feeling after this conflict [that] more and more people are going to say ‘I’m Russian-Jewish, I am Russian-speaking Ukrainian’ to try to differentiate themselves from Russians.

“More than 2,000 civilians have died, Ukraine State Emergency Service said.
All that bloodshed and hardship does not sit well with most in the community.
Some now fear that the enclave may start to feel anti-Russian backlash similar to what Muslim Americans experienced following the terror attacks of September 11, 2001.

“‘There’s a lot of anti-Russian sentiment,’ said Mr. Levitis. ‘People are afraid we’re going to be conflated with the Russians overseas.’”

But Mr. Levitis believes the community will rally together and remain united, despite the events in Europe.

“Nobody is getting divorced over this, we’re all intertwined,” he said. “We still live here together in one community, we all go to the same stores, same restaurants, patronize the same businesses and everybody is intermarried with each other.”

From my vantage point, it looks like all the Russian-speaking Americans now identify themselves with Ukrainians. Many have Ukrainian ancestry. (I was born in Moscow, but my great-grandfather was an official Rabbi of Kyiv.)

The close connections between Ukrainians and Russians had always existed. Today several millions citizens of contemporary Russia have close relatives in Ukraine.

Nobody believes statistics indicating that about 80% of Russian citizens support the war with Ukraine.

Of course some Russians do believe the official propaganda, which now has replaced all entertainment programs on Russian state Channel One TV. Day and night Russians are told that Ukrainians are Nazis who by American order are planning to ruin Russia.

Yet those who do not believe such propaganda are afraid to reveal what they really think. People are sent to jail for any anti-war expressions.

If a person in New York speaks on the phone with his brother in Moscow, in most of the cases the war in Ukraine will not be even mentioned, to prevent endangering the Moscow brother.

Sometimes a brother in Moscow will try to convince a New York brother that all publications about Russian war atrocities are American propaganda and the real villains are Ukrainians, because they are Nazis and Russians are saints who sacrifice themselves to save Ukrainian people from American slavery.

It is different though in New York. It’s not surprising that one can hear a lot of Russian language conversations in the line to the Ukrainian East Side restaurant “Veselka”, which later became especially popular.

“On a Wednesday morning at 10.30 am, a line is already forming around the corner. The menu – which boasts pierogies, potato pancakes and borscht – isn’t normally considered brunch food. A homemade ‘Ukraine belongs to Ukrainians’ poster greets customers as they walk in. Flyers urging customers to support Ukraine are distributed and taped to the building’s towering windows: ‘Eat Borscht – Stand with Ukraine’ reads a poster, signaling that 100% of proceeds made from the restaurant’s famous bright-red beet soup are being donated to help Ukraine.” 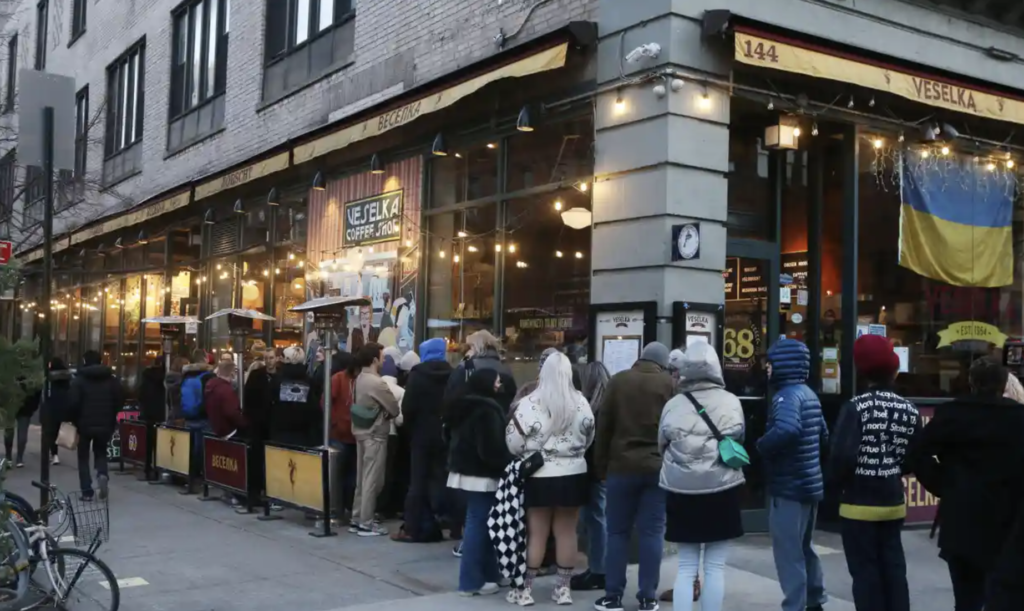 The line to “Veselka”.