According to various sources, since the beginning of the war in February 24, 2022, seven to eight million Ukrainians have left the country.

The United Nations High Commissioner for Refugees reported that as of August 3, over 6 million Ukrainian refugees were recorded throughout Europe. The absolute leaders in receiving immigrants were Russia (1.97 million), Poland (1.26 million) and Germany (915 thousand people). The United States accepted more than 100 thousand refugees from Ukraine.

Helping such an amount of refugees is a tremendous task. A multitude of organizations including international giants like United Nations and Red Cross is involved in the process, but an enormous amount of help is provided by volunteers – both private and in thousands of local and international non–governmental organizations all over the word.  The Internet is crowded with the sites of organizations helping Ukrainian refugees.

It is not widely known that a lot of Russian citizens are helping the Ukrainian refugees.  They are risking their jobs and social positions and often even their lives to do so.

Tatiana Moskalkova, Russian Commissioner for Human Rights, writes in an article published by the Russian website RG that since February 2022, five million people, including more than 700,000 children, have arrived in Russia from Ukraine and from the separatist-held pro-Russian Donetsk and Luhansk regions of eastern Ukraine.

A lot of allegations have now surfaced that Russian forces are deporting Ukrainian nationals to Russia. For example, on March 19, an official in the besieged city of Mariupol charged that Russia had taken “between 4,000 and 5,000 Mariupol residents forcibly across the border to Taganrog.” The Ukrainian Ministry of Foreign Affairs labeled the action “a gross violation of international law,” while the U.S. Ambassador to the United Nations observed that, “If true, it is unconscionable for Russia to force Ukrainian citizens into Russia and put them in what will basically be concentration and prisoner camps.”

The Ukrainian Prosecutor General has also accused Russia of “the forcible transfer of 2,389 children from temporarily occupied territories of Ukraine to Russia.” Citing Ukraine’s Ministry of Foreign Affairs statement on the matter, the U.S. Embassy in Kyiv acknowledged the claim, adding that the children were from “Donetsk and Luhanks oblasts” and stated, “This is not assistance. It is kidnapping.”

Expectedly, the Russian Embassy to the United States has denied the accusations. Instead, Russia’s Defense Ministry has suggested that they are “refugees” from Mariupol. More broadly, Russian officials assert that Ukrainians are willingly fleeing to Russia . For instance, the head of Russia’s National Defense Control Center has claimed that over 7,800 Ukrainians “expressed their desire to escape to the Russian Federation” on March 19, alone. Overall, the Russian Defense Ministry asserts that 2.6 million people have asked to be evacuated to Russia.

It’s difficult to estimate what percentage of the Ukrainians who transferred to Russia really want to stay there. Such Ukrainians are helped by Russian governmental, religious and other Russian organizations and loyal private individual volunteers. Helping such Ukrainians is not a crime in Russia.

But there are thousands of Ukrainians who had been transferred to Russia forcibly or had to run from Ukraine to Russia because they had no other way to escape the war action area. These Ukrainians are eager to leave Russia for some other country as soon as possible.

Russians who assist such Ukrainians face political threats at home, where such help might be recognized as treason.  Bank transfers can be immediately traced back to the donor.

Some Russians are notably helping not only helping Ukrainians refugees in Russia. They have also found ways to help those who are still in Ukraine and who want to leave, not to Russia, but to other countries.

A Ukrainian who wants to escape the war in Ukraine can find an organization ready to help him/her via the Internet.

Rubikus is a good example of such international organization and a lot of Russians work there. Its site starts with these messages:

“Rubikus is a team of volunteers that helps people reach their new homes.

Consultations:
We will tell you how Ukrainians are welcomed in different European countries and what requirements must be met to enter them.

We will plan a convenient route, select appropriate transportation, and provide extra mobility support for those that need it.

A Rubikus coordinator will be with you each step of the way. They will support you, provide advice, and help resolve any issues or difficulties.”

The moment a Ukrainian reaches Rubikus he/she is asked about important details such as the age and sex of people who want to leave; presence among them of elderly or sick people, children, pets; address of their present location; and desired destination. According to this information, a coordinator is appointed to the new client.

Rubikus is an international organization and its coordinators are all over the world. A lot of them are located in Russia. It is logical that a coordinator should be fluent in a language known to almost all Ukrainians and in the same time know some European languages in order to be able to help the clients on the way across different countries.

Rubikus has volunteer agents all over the world. Some can provide transportation: cars or buses, some can give medical help, some provide food or accommodation. A coordinator has telephone and Internet connection with all these people and can connect them with their Ukrainian clients. The coordinator has a contact with their clients 24/7, ready to help them to find the necessary help.

A popular Russian language YouTube and TV channel “Redactsia” covers in details the life and problems of Ukrainian refugees throughout the world. One of its programs was devoted to volunteers helping Ukrainians to leave Ukraine.

Elena M. is one of the heroes of the program. She is an animated films producer, living in a Moscow suburb. As the Ukrainian war started, she felt that her job lost its sense and she quit. First she started helping a family of Ukrainian refugees settled in her neighborhood. Then she joined Rubicus as a coordinator. She is fluent in German. 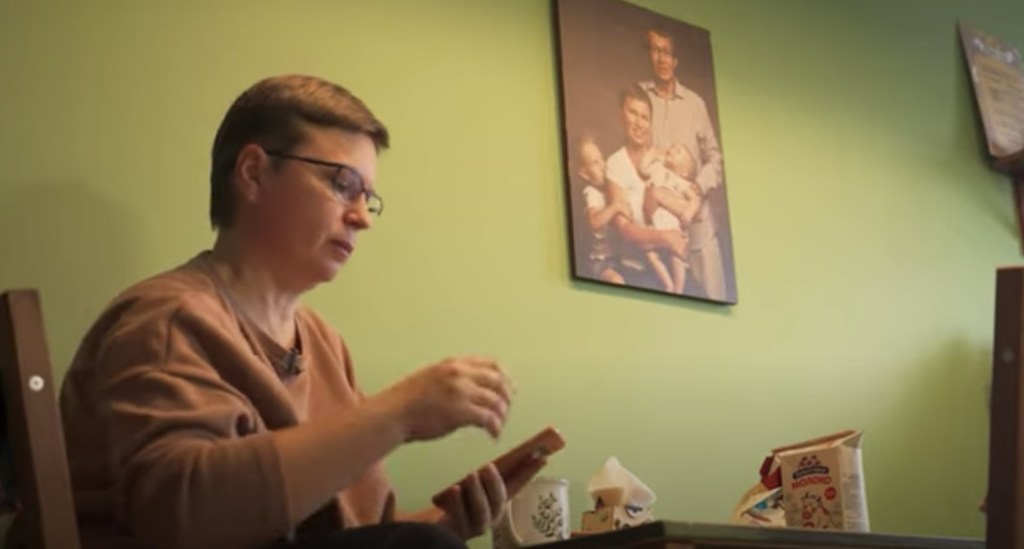 A picture from the “Redactsia” program. Elena M. is working.
On the wall is a photo of her family.

The “Redactsia” program ends with a monologue by Alexander Mindlin, a theatrical director from St. Petersburg who for the last 30 years has resided in Berlin. Today about half a million Russian speaking emigrants live in Berlin, among them 26 thousands former Russian citizens. Alexander owns a minibus and since the beginning of the war his main occupation is bringing Ukrainian refugees from railroad station to hotels and hostels.

Here is a translation of his monologue:

“You know, they say: “Germans have the gilt about the WWII. What about Russians?”  Do they have gilt concerning the war in Ukraine? Are they ashamed? F–k! What I feel is physical pain! One cannot sleep because of this pain! What I do, I do not for the Ukrainians, but for myself. I go to the station, take several families from the cold floor, take them to a hostel, and then I am able to sleep the night.” 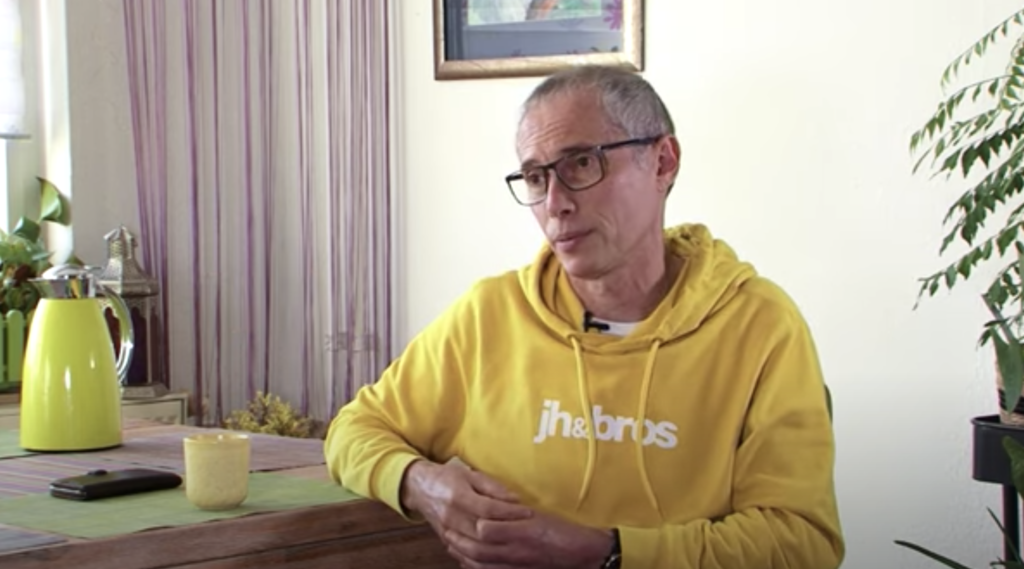