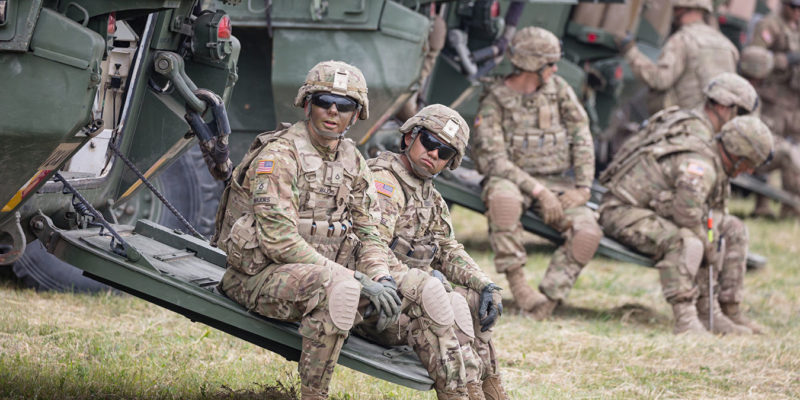 “NATO troops near the borders of the Russian Federation will run away without a single shot”.
The photo and its comment are from the Russian website www.belvpo.com
January 2, 2022 (https://www.belvpo.com/111017.html/)

On December 21, New York Times published an article “How the Kremlin Is Militarizing Russia”.

Since then the militaristic mood of the Russian media has grown. On December 21, the blogger Igor Yakovenko summarized the mood:

“On TV, there is a permanent celebration of ‘Victory Day’. It seems that Russian troops not only have already taken Washington DC, and also Kyiv, Warsaw, and London, but now they are looking for the power who could sign the act of surrender on behalf of the whole collective West.”

Here are some typical headlines in Russian papers and websites:
“West: Russia must be on its knees.”
“Russians will bring back the America’s fear of Russia.”

Here is the beginning of the article, spread by the official TASS press agency, entitled: “US bombers rehearsed a nuclear strike on Russia.”

“Russian Defense Minister Sergei Shoigu said during his talks with Chinese Defense Minister Wei Fenghe: ‘This month, during the US strategic forces exercise Global Thunder, which was held 20 kilometers from the Russian border, 10 strategic bombers exercised the option of using nuclear weapons against Russia almost simultaneously from the western and eastern directions,’”

“According to Shoigu, the Russian air defense systems record a significant intensification of the actions of the American strategic bomber aviation near the borders of Russia. Over the past month, there were about 30 flights to the borders of the Russian Federation, which is 2.5 times more than the number of flights in the same period last year.”

Experts interviewed by the popular Gazeta.Ru agree that if the talks fail and tensions continue to escalate, there is indeed a chance for a military response from Moscow. In the opinion of Viktor Murakhovsky, editor-in-chief of the magazine “Arsenal of the Fatherland”, the Russian Federation will give an adequate response if the group of troops and high-precision weapons continues to build up near its borders.

Alexei Arbatov from IMEMO RAS (The Institute of World Economy and International Relations, a leading research institute based in Moscow, Russia) believes that Russia’s reaction will be the deployment of troops, weapons, and the creation of a threat to those states that do not take into account the security interests of the Russian Federation.

The influential official TV personality Dmitry Kiselev, famous for his threat to “turn the United States into radioactive ash”, returns to his threats:

“If we are talking about Ukraine’s accession to NATO or the military development of the territory of Ukraine, then we will put our pistol barrel to the temple of the United States. We have a military-technical opportunity, Russia has the best weapon in the world, hypersonic…”

Kiselev is echoed by the head of “Russia Today TV” Margarita Simonyan, who threatens to start a completely non-hybrid war on the air of the popular “60 Minutes” TV program.

According to the independent Levada Center, half (50%) of those polled believe that the United States and other NATO countries are the exacerbators of the situation in eastern Ukraine. 16% think that Ukraine was the initiator of the escalation, 3% – the unrecognized republics of the DPR and LPR, and only 4% – Russia.

Older Russians are more influenced by the propaganda. Among Russians 55 years and older, 61% believe that the United States and NATO members are the initiators of the escalation in eastern Ukraine, while only a quarter (24%) of respondents aged 18-24 support this opinion. Representatives of the youngest category more than others (20%) are inclined to believe that the aggravation was initiated by Ukraine.

At the same time, 3% of respondents are confident that the current tension in the east of Ukraine may escalate into a war between Ukraine and Russia. Another 36% consider this scenario to be “quite probable”. Almost the same number (38%) consider a war between the two countries “unlikely”, and another 15% completely exclude such a possibility.

There is practically no difference in assessments of the situation between respondents from different socio-demographic groups.

All the polls show how much the political moods of Russians were changed lately by propaganda.

According to the latest poll by the Levada Center, Stalin is rated positively by 60% of Russians, of whom 45% evaluate him with respect, 10% with sympathy and 5% with admiration. Sociologists note that the rate of approval of Stalin by the citizens of Russia now has become the high point for the entire time of such polls since 2001. That is, Stalinism grows along with Putinism. Only 11% of the respondents said they had a negative attitude towards Stalin’s personality, of which 5% – with hostility, 4% – with fear, and 2% – with disgust.

The percentage of Russians who regret the collapse of the Soviet Union has been increasing since 2011. Then 51% of respondents answered positively to this question. In December 2014, there were already 58% of those who regretted, and in December 2021 – 62%.

52% of the respondents expressed their desire to revive the Soviet Union. 31% of respondents would not like to re-create the Union.

A famous actress, known for her liberal, pro-western attitude wrote in FB a post criticizing Putin’s ruining of the opposition and, especially for closing the Memorial International, one of the country’s most respected human rights organizations. The closing wiped out three decades of work to expose the abuses and atrocities of the Stalinist era.

An actress’s acquaintance, a screenwriter commented:

“I will answer succinctly. Emotions aside, there are only two political positions. As in the children’s gam, some are ‘For ours’ and others are ‘For the Germans.’ So, your whole party, all of you – the Memorial, and the Navalniy’s sympathizers – are all ‘for the Germans.’ And you’ll find a lot of arguments why your position is correct and good. And I and most of the people in Russia are for Ours. Just because they are ours. And, by the way, it is very good that these positions have become clearer.”