If these men were everyday women working in everyday offices, they wouldn’t be subpoenaed to testify before a Senate impeachment committee looking to sack their boss.

If they were women, covering for their boss, they’d be expected to shut up and get back to work.

This week in Harrisburg was all about role reversals.

The Pennsylvania Senate’s “Special Committee on Senate Address” wrapped up a series of hearings this week to lay the groundwork to remove state Attorney General Kathleen Kane from office.

By all indications, the committee is set to recommend that the full Senate attempt to remove Kane, using a constitutionally questionable procedure the GOP leadership hopes will cut short hearings and stifle debate.

As most readers know, last month Kane saw her law license suspended by an angry and compromised state Supreme Court. 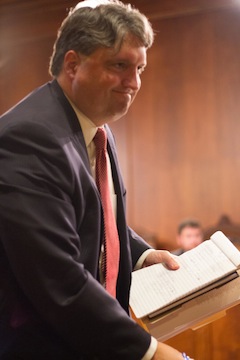 Kane, among other forbidden transgressions, revealed that justices on the high court were emailing pornography with other randy boys in and out of state government. In retaliation for this and other matters, the court suspended her law license.

Hoping to rid themselves of meddlesome Kane once and for all, the Senate’s “Special Committee on Senate Address” has decided to subvert the constitutional role of the state House by attempting to impeach Kane.

So this is the first role reversal: the Senate is taking on the constitutional duties of the House.

This is the second role reversal: Kane, no doubt politically embattled, but sane, is being legislatively treated by the intellectually challenged GOP old boys as if she is the mentally impaired one, or a lunatic.

To that end, the Senate’s ad-hoc impeachment committee held a series of lackluster hearings over the last two weeks, in which it was heard that the attorney general’s office was still functioning relatively well, all things considered, despite the court’s imprudent yanking of Kane’s law license. 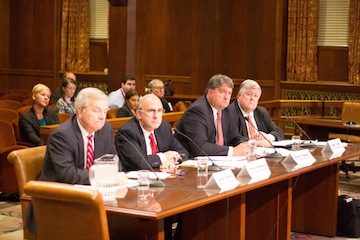 This third role reversal, though certainly not as constitutionally troubling or insulting to the mentally ill, proved to be much more socially enjoyable to consider.

With their boss indisposed, the committee was told, the four men were forced to put their little heads together to figure out how to run the office.

Of course, the same thing has been going on in offices from time immemorial, except women traditionally have been forced to run the show while the male boss is indisposed, to cover for him.

Except, with this enjoyable and madcap plot twist: Deputy AGs Beemer, Donahue, Mulle and Cherba are playing the roles of Dolly Parton, Jane Fonda, and Lilly Tomlin, as the secret power behind the thrown, calling all the shots, while the Dabney Coleman part, in a casting coup, goes to Kathleen Kane.

The committee read aloud a memo drafted by the four men in late October, shortly before Kane’s law license was yanked, explaining how they would now assume any and all of her duties that require a law license.

Committee chair Sen. John Gordner ran down a checklist of duties as expressed in the memo.

“Recognizing your role as attorney general, but the fact that your license is suspended, you should be informed of all actions that will be taken by the office, as you normally would,” Sen. Gordner read from the memo the four had written to AG Kane. “However, the ultimate decision on legal matters must lie with the first deputy,” who is Beemer, the committee heard. “‘The types of decisions that should ultimately be decided by the first deputy should include,’ and then there’s a list of six items. Number one is a decision on whether to bring a civil or criminal action. Since October 22, is that in fact your role, or whose role is it, on whether to bring a civil or criminal action?”

“That is a role within the office that the ultimate decision has rested with myself,” Beemer told the committee.

In fact, the committee was told, the buck for just about all legal decisions now stopped with Beemer.

“And were you delegated by Kathleen Kane to do that or have you assumed that responsibility?” Sen. Gordner asked Beemer.

“That responsibility has been undertaken based on me reading … both the Pennsylvania constitution and the Commonwealth Attorneys Act,” Beemer explained.

Of course, if Beemer had read the Constitution, as he says, what was he doing testifying at a House impeachment function in the Senate? The mind boggles. But, nonetheless, you get the idea.

“The second thing is decisions on whether to settle civil actions,” Gordner asked. “Who is taking on that responsibility?”

“And have you been designated or delegated to do that?” Gordner asked.

With that, Executive Deputy AG Mulle explained, “Senator, we have, as (Beemer) indicated, as lawyers, looked at the controlling statutes that govern the operation of the office of the state attorney general and have, in light of the suspension, put together a protocol that we follow, which goes to the first deputy (Beemer) as currently the ultimate legal authority for legal decisions within the office.”

So there you have it. While AG Kane swings from the rafters, strung up by an angry state Supreme Court, the boys in the office have taken over.

This arrangement, the four testified, was working surprisingly well with practical and everyday matters.

“What Mr. Mulle says is absolutely correct,” Beemer told the committee. “We believe we are on very solid, firm footing. It doesn’t alleviate the potential problems that could come up over and over and over again and that we have to face and litigate in the courts to address and deal with this issue.”

It were these “potential,” hypothetical problems that the committee then led the prosecutors through, as fodder for the state press.

What would happen, for instance, if a county judge were to throw out a case on account of Kane’s suspension? Beemer and the others fretted.

Kane’s law license suspension obviously has had a “profound and extraordinary” impact on the AG’s office, the committee was told, a sound bite which made the headlines in several newspapers, and so on.

No one, predictably, before the Senate impeachment committee questioned the wisdom or fairness of Kane’s law license having been suspended by the high court before she stands trial. So, truth be told, this is another fine mess ultimately created by Pennsylvania’s clownish and pratfall-prone state Supreme Court, not Kane.

“All we can do is operate with the hand we’ve been dealt,” Beemer shrugged.

Of course, as many women in office settings know, most of us in the real world must everyday operate with “the hand we’ve been dealt.”

You get up, and pour yourself another cup of ambition, as Dolly Parton sings. They just use your mind, and never give you credit. Working 9 to 5, it’s all taking and no giving!

If these officials were everyday women working in everyday offices all around this broad commonwealth, I suspect, they wouldn’t be subpoenaed to testify before a Senate impeachment committee looking to sack their boss.

If they were women, covering for their old-boy boss, they’d be expected to shut up and get back to work.

The most startling moment in this travesty came when Senate President Pro Tem Joe Scarnati, an ex officio member of the Senate’s impeachment committee, and its swing vote, demanded of the panel, “Is Kane even coming to work?”

From a man who has failed to produce a state budget, now overdue by five months, this is a startling question indeed.

Other potential indignities in this wacky role reversal went unexplored by the off-the-rails Senate impeachment committee.

Were any of these four subordinate men ever forced to bring AG Kane a cup of coffee, or to go shopping for her family members to pick up last-minute gifts on holidays, as women in many offices often silently suffer?

I have it on good authority that these four underling men also failed to reveal their most secret dread: that the women in the office might go off on a two-week fishing trip, or a Canadian moose hunting expedition, and force the men to answer the office phones.

Let’s at least try be honest here in Pennsylvania, for just one moment: If these four officials were women, there would be plenty of mention in the state press, not of their job duties, but of their wardrobe.

So here we go.

All the men were draped in demure, if suggestive, red ties, highlighting their eyes and their tonsorially splendid and appropriate hair-dos.

Several of the men, while overweight, tastefully concealed their ample bust lines behind well-cut, conservative jackets.

Their choice of matching gray trousers, concealing their solid girth, seemed also to be a crowd pleaser on the impeachment committee walkway.

The addition of floral hats, and matching bags, shoes and accessories, would, of course, seem to be advised to tie their outfits together.