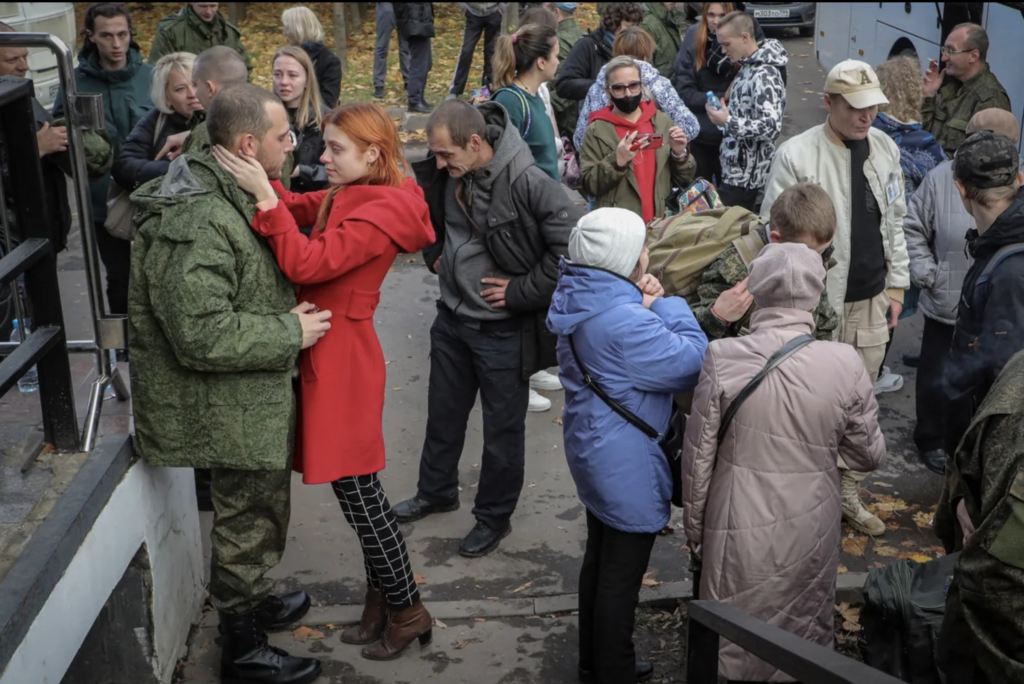 Farewell of Russian man leaving to fight in Ukraine. A photo from Facebook.

After more than 8 months, the Russian war with Ukraine continues. The last weeks of Ukrainian successes in battles and Russian mobilization resulted in nearly a million young Russian men fleeing from the country. It seems all that should create disappointment in Putin’s politics for most Russians. Unexpectedly, statics tells the opposite.

These figures are often explained by the fact that respondents don’t tell what they really think. It is true. But still, why is the approval of Putin growing?

Facebook publishes a lot of real stories of ordinary Russian people, told by themselves, and these stories very often reflect the logic of the respondents of polls.

Here is the story of a woman, 24 years old, from city of Ulyanovsk.

“My husband and I have been married for a year and a half. Our son is one year and four months old. I’m on maternity leave, taking care of the child. On October 1, my husband was mobilized and sent to a training center in Penza. He has category A, he served in the Army, his specialty is a driver-mechanic of an infantry vehicle. Even before the summons came, he wanted to volunteer and speedily completed all tasks at his work.

“He worked as a foreman at Avtodorengineering LLC and earned good money, 80 thousand rubles ($1300) a month. This money was enough for us to live. We bought an apartment in Ulyanovsk on a mortgage and took several additional loans in the amount of a million rubles. But now I don’t know how to pay them further. I need to pay about 40 thousand rubles a month. I have some money, but it’s only enough for a month. My husband was promised that while he was staying in the military unit, he would be paid 30 thousand rubles a month, but it is not known when to expect this money. I myself cannot go to work, because, of course, a child at such an early age will not be taken to kindergarten. He eats mostly a mixture from a jar and almost never goes to the potty himself. I can potty train him so he can be taken to daycare, but that won’t happen at the snap of a finger either. My husband’s parents work and cannot take care of the child, my father also works, and my mother is sick. Of course, they can help financially, but not much. They also have their own problems, their own loans.

“When my husband was getting prepared to go to the army, he also had to spend money on uniforms and some equipment, but not much. Some men needed to buy everything themself. I think we were lucky. In the military registration and enlistment office, almost everything was given to my husband. We bought only a first aid kit, hygiene products, shorts, socks, thermal underwear, second pair of shoes, and a second set of uniforms.

“Now we are constantly in touch with him. It is while he is in training. I think when they are sent to the war zone, there will be no communication and the real smash-up will begin. When we talk over video phone, I show my husband the baby. They miss each other very much. The child understands that his dad is far away. This is very frustrating. But we’ll manage. I really hope that our state will not leave us without help and that my husband will come home soon. The main thing is not to lose heart and think positively.

“Of course, I cried when I saw him off. But I always support him and even in this situation I said: ‘It will be as you decide. You are man, it is your duty.’
Many families are now in a situation similar to mine but they say nothing. Because of this, the authorities do nothing, though they should. I wrote a comment on the page of the governor of the Ulyanovsk region with a question about whether assistance will be provided to families like ours. It was the cry of my soul.

“Our country has many disadvantages, but this does not diminish the love for it. Our president is gold, and God knows what will happen if someone else comes to power. We are for our president, we love him and support any of his decisions. He never makes mistakes, and if he said that it is necessary, then it is necessary.”

Why does this woman, who obviously describes her life as hardly tolerable still trusts her government, and idolizes Putin?

Most Russians, as well as this woman, know from their personal experiences that their “country has many disadvantages”. But also most Russians get all their political information only from TV. This Russian TV tells them that almost the entire world hates Russians and wants to enslave them; that the Nazis in Kyiv, led by Americans, are preparing a “dirty bomb” to kill all Russians; that Ukrainians are growing in secret Biolabs special Russophobic strains of harmful bacteria, and that the population of Donbas has been suffering  genocide created by Ukrainians for years.

Russians easily trust such propaganda, because not only they, but generations and generations of their parents and ancestors, in Soviet and Tsars’ times, had no other political information other than similar propaganda. Any information coming from the government they considere equal to scientific truth. The small percentage of Russians who manage to get different information was always presented to them as traitors, financially backed by enemies and punished by sevear laws.

The part of this mentality, cultivated with centuries, was the belief that Tsar is always as right, as God, and all the problems are created by bad functionaries.

Growing up in the Soviet Union I’ve seen numerous examples of such belief.
I was a child when Stalin died. I still remember that my father, a wise man, who spent 5 years of WWII as the head surgeon of the military hospital, was terrified, expecting that without Stalin life will become much worse, as only Stalin could control his terrible functionaries.

So it’s very normal for Russia, that a woman from Ulyanovsk believes that “Putin is gold”. It is consistent with historical Russian tradition.

Another thing consistent with this tradition is the woman’s belief that nothing depends on her or on any ordinary Russians. Considering herself/himself a victim is a traditional, “normal” mentality of a Russian. Most of my Russian friends now share this attitude with this woman.

Here is another quote from Facebook, illustrating the situation:

“I was talking to a friend. Imagine, he is telling that in their office their accountant was drafted and taken away straight from his place of work. He is 38 years old, has two children and his wife is pregnant with the third. He had never served in the military. He is not supposed to be drafted. Why did he go?

“The accountant explained to my friend:

“The accountant explained to my friend that ‘they forced’ him.

– How? How one can force somebody to sign something?
– Well, at work, I was afraid …

“So, who’ll explain to me, what could be more frightening than a perspective of dying in a senseless slaughter, killing others?

– His wife bought him the uniform for 200 thousand!

Of course, not all the Russians are like that, but it looks like most of them are joining the majority, even when they understand that majority is wrong. Here is another quote from Facebook:

“The first reacts very loudly, already on the verge of hysteria:

– Oh, that’s how! Mine, then, must fight for your bastard?

“And then the second woman turns around. Calmly, almost without parting her lips, she says:
– Why for my son? For your beloved Putin. And my son will not go to this war.
Who said that? – asks the first one, not so loud anymore.

– I said. I am the mother and I said, – the second woman turns to the checkout.

“While the woman was paying, and putting purchases in her bag, it remained quiet.” 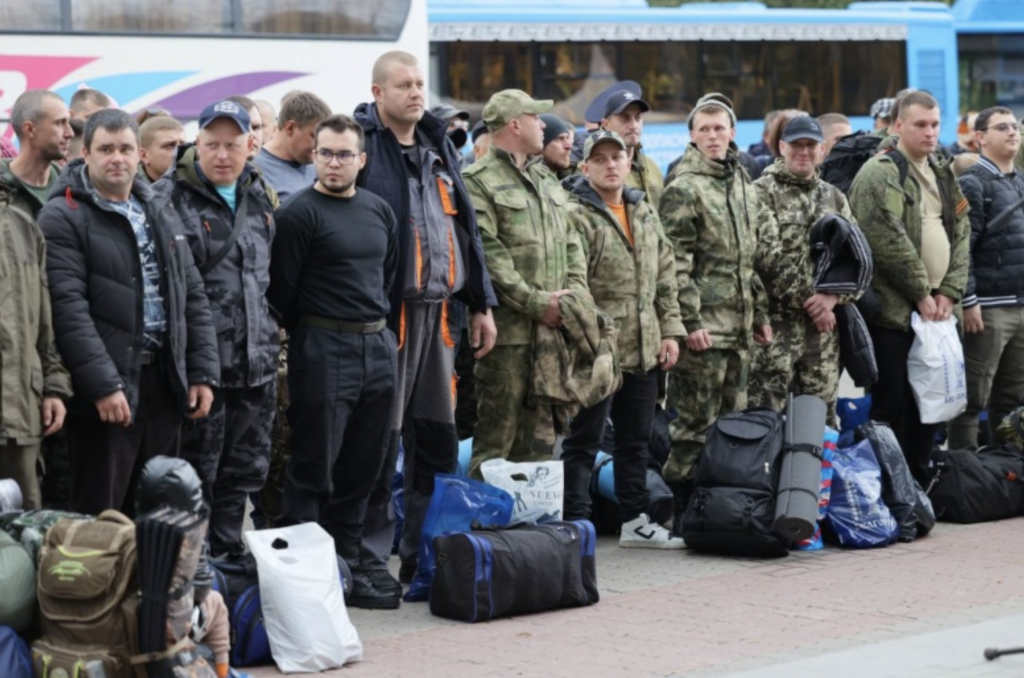 Russians mobilized from the Belgorod region.