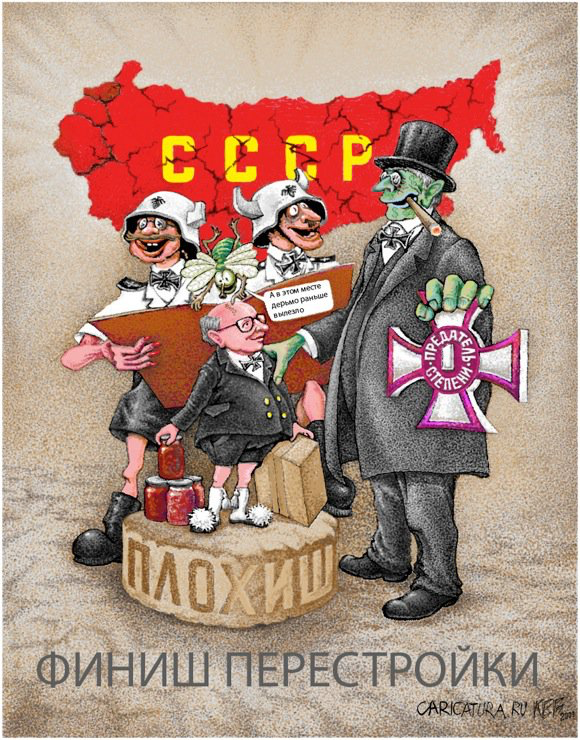 Typical Russian caricature “The end of Perestroika”. Gorbachev sells out USSR to Uncle Sam and receives from him the medal “Traitor of the 1st degree”.

On October 4, 2019, Boris Chernyshov, deputy chairman of the State Duma’s Education and Science Committee, proposed introducing the new preferential category of citizens in Russia – “Victims of perestroika”. He addressed his initiative to the Minister of Labor Maxim Topilin.

Chernyshov said the victims who suffered most during the reforms of the 1980s, were from 25 to 45 years of age. He claimed many of them either died early or worked hard and developed diseases as a result of Perestroika.

Criticism of Perestroika is not a new issue in Russia. While supporters of the democratic development of Russia have no doubt of the mostly positive outcome of the Gorbachev’s and Yeltzin’s reforms, many Russians consider them a victory of America and Western European countries in their campaign to ruin Russia.

This point of view is fully or partly supported by many.

Vladimir Putin called dissolution of USSR “the biggest geopolitical catastrophe of the century.”

Even Wikipedia article on Perestroika presents it as a not completely positive phenomenon.

“Perestroika allowed more independent actions from various ministries and introduced many market-like reforms. (…) The process of implementing perestroika created shortages, political, social, and economic tensions within the Soviet Union and is often blamed for the political ascent of nationalism and nationalist political parties in the constituent republics. Perestroika and its associated structural ailments have been cited as major catalysts leading to the dissolution of the Soviet Union.[4]

“The elimination of central control over production decisions, especially in the consumer goods sector, led to the breakdown in traditional supply-demand relationships without contributing to the formation of new ones. Thus, instead of streamlining the system, Gorbachev’s decentralization caused new production bottlenecks.”

In Chernyshov’s letter to the minister, the parliamentarian said that political, ideological and economic reforms in the 1980s became a massive geopolitical and humanitarian disaster for millions of people in the USSR.

The politician recalled that at that time a significant decline in the birth rate and a sharp increase in mortality were recorded in the country – from this he deduced that many “victims of perestroika” died early or became seriously ill.

“Those who nevertheless managed to live in an era of change have faced serious trials. I propose to designate this category of population as ‘victims of perestroika’, who should also be provided with various benefits and subsidies,” the appeal states.

These reasons, according to Cheryshev, are the basis for socially supporting people in this category. Of what the assistance to the “victims” of reforms might consist has not been publicly suggested.

Some experts criticized the initiative of the deputy chairman of the committee. Even former vice president of Russia Alexander Rutskoi, who in the time of perestroika was one of the active opponents of Yeltsin, was against the proposal.

“Such an initiative is pure stupidity.

“Perestroika was a difficult time for everyone. Then a lot of stupid decisions were made, the economy was limping on both legs, it was sad to look at the empty shelves in the stores. But this time was difficult for the entire country. Are they going to give benefits to all Russians? The State Duma proposed introducing benefits for ‘victims of perestroika’. Who falls into this category?”

Rutskoi urged officials to turn to the “real problems”:

“They better look at what salaries doctors and teachers have, what pensions veterans of labor have, and they better find solutions to these problems. Because living with them is a shame.”

Deputy Director of the Institute of History and Politics of the Moscow State Pedagogical University Vladimir Shapovalov also believes that all Russians fit the category of “victims of perestroika”. In addition, he emphasized that when proposing such proposals, it would be worthwhile initially to conduct a historical analysis of the perestroika stage, and not to rely on one’s own sense of the reforms of the 1980s.

“We need a big and thorough discussion, a public discussion about the role and place of Perestroika and the events that accompanied this difficult stage in the life of our society,” the historian said in a conversation with RT.

At the same time, Shapovalov admitted that it is not necessary to list by name all who were between the ages of 25 and 45 years old during the time of perestroika.

In turn, the Federation Council agreed with the historian that all Russians to one degree or another suffered as a result of perestroika.

“What nonsense. Should the whole population of the country be recognized? Someone lost their pensions, some – their savings, some housing, fleeing the nationalist showdowns that were in the Union republics. Extremely destructive offer. We need to move forward, why look 91 years back?” said the head of the Committee on Social Policy of the Federation Council Valery Ryazansky.

Sergei Tsyplyaev, who was a member of the Supreme Council of the USSR during perestroika, emphasized that the reforms that took place at the end of the 20th century were necessary to resolve many problems in Russia, and the country’s citizens took part in this, so it is difficult to call them victims.

He also expressed confidence that the initiative of the State Duma deputy would not go beyond discussions.

“Mr. Chernyshov emphasized that Perestroika led to a drop in the birth rate and an increase in mortality. But this is not an argument: the decline in fertility is a trend in all developed countries, a high one is observed only in poor countries. If they are victims, then perhaps they are too well developed,” Tsyplyaev concluded.

Former Chairman of the Supreme Council of the Russian Federation Ruslan Khasbulatov even called the Chernyshov’s initiative an attempt to divert attention from the current problems in the country, as well as unwillingness to help the citizens of modern Russia.

“It’s ridiculous to introduce such a social category. Does he consider the last 20 years a happy period for our people? Every historical period, people have difficulties and achievements,” concluded the politician.

EDITOR’S NOTE:  In 2009 the film “Perestroika” was released.  It was  written and directed by Slava Tsukerman.  To some, its message at a time of greater optimism concerning Russia,  seemed somewhat dour.  Today the dark forces that Tsukerman exhibited have become prominent ir not dominant.  Only someone a talented as Tsukerman and who grew up under Communism, left Russia for Israel and later the USA,  and who has stayed in touch through trips and communications with many scholarly and artist friends could have conveyed such insights, especially as early as 2009.  And as is always the case with Tsukeman’s films, the visuals are extraordinary.