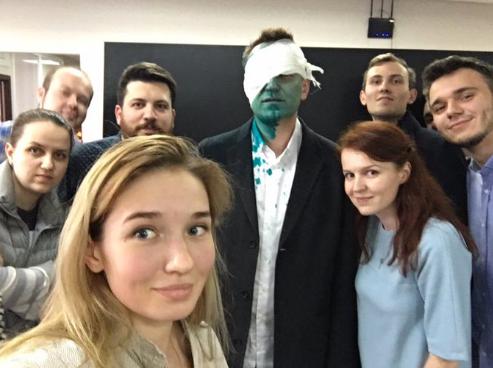 Alexey Navalny and his supporters right after attack in Barnaul.

On April 27, the Russian opposition leader Alexei Navalny was opening his headquarters in the Russian Siberian city of Barnaul. Unexpectedly he was doused with a bright green liquid, so called “Zelionka”, by an unknown assailant.

Zelenka is an inexpensive medicine, commonly used in Russia as a go-to antiseptic for scrapes and cuts. An attacker sprayed antiseptic in Navalny’s eye.

I was surprised that American press mostly presented the event as a mere act of political hooliganism, which can be met with healthy humor. Here si how the New York Times described Navalny’s reaction to the attack:  “Referring to masked heroes in Hollywood films in a post on Twitter, he wrote:

‘I will be opening a headquarters in Barnaul as if I am from the film The Mask! Cool. Even my teeth are green!’”

In fact right after the attack Navalny was taken by ambulance to a hospital. Doctors concluded that zelionka was mixed with some kind of acid and politician’s eye was severly burned. By now Navalny lost 80% of vision of one of his eyes. There is a danger that he’ll get blind. The only chance of cure is corneal transplant, which cannot be made in Russia for the lack of necessary equipment. Navalny was moved to a hospital abroad.

For almost two weeks authorities refused to start any investigation of the assault. Only after much outcry in the opposition media was an investigation  started.

Meanwhile Russian bloggers made their own investigation. It wasn’t difficult to do so, as four video recordings of the attack exist and some of them were shown on TV. According to the research the attacker was a fairly known person Alexander Petrunko, the member of a pro–Kremlin radical movement SERB. An abbreviation SERB stands for “South East Block”. The organization became known when separatist activists took part in the rallies with the demands for granting larger independent powers to the regions in the South-East of Ukraine. Later Petrunko and some other activists of the movement moved to Russia. 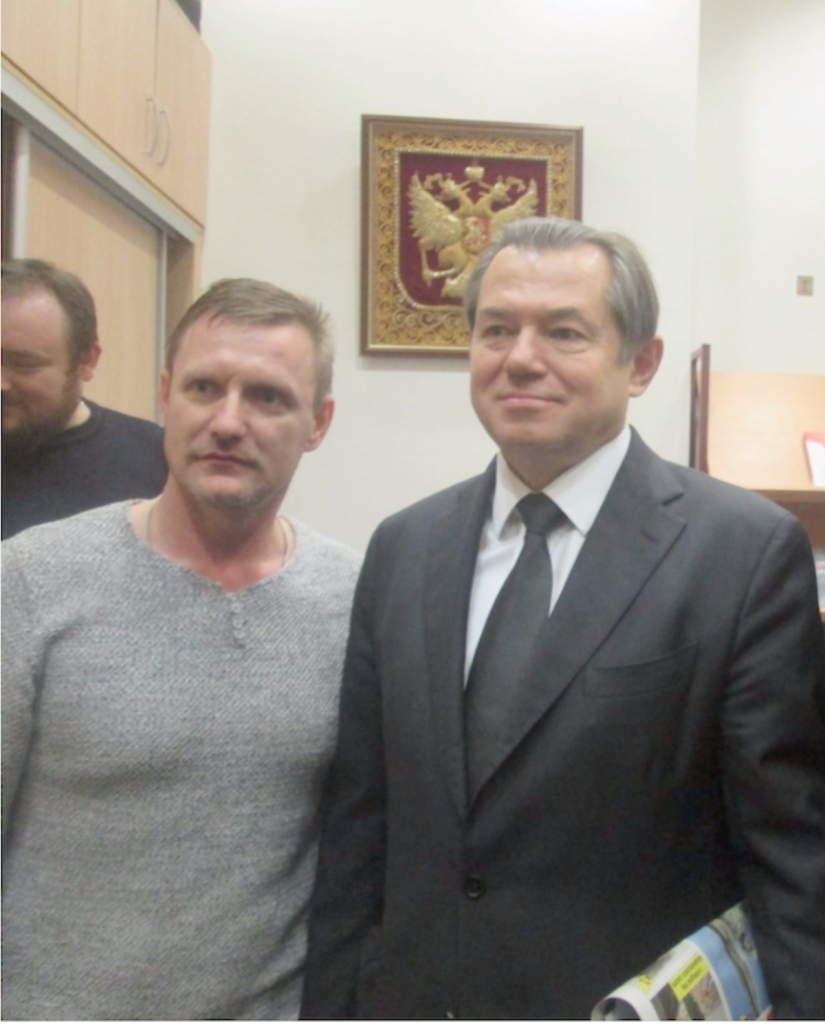 Here is a photo of Petrunko (on the left) with the President Putin’s Advisor Sergey Glazyev. Glazyev is a Russian politician and economist, Member of Russian Academy of Science since 2008. He was a member of government in 1993, a member of the State Duma in 1993-2007, and ran for President of Russia in 2004. Glazyev was a co-founder of the patriotic Rodina (“Motherland”) party.

It was not the first time when members of the opposition were attacked with zelionka in Russia.

Here is an excerpt from an auditorial in the Russian oppositionary newspaper Novaya Gazeta:

“Now green is the color of the alarm in the Russian political spectrum. Zelionka, as well as eggs, flour, feces and unidentified poisonous liquids in conjunction with beatings and arson are the weapons that are used against opposition politicians, journalists, and human rights activists. Initially these were isolated cases; now it is the downright epidemic. One can certainly say that it’s much milder form of ‘fight’ than political assassinations and criminal prosecutions. Russians had experienced such extremities so they can make a comparison. But it’s all the symptoms of the undeclared civil war against opposition and the degree of confrontation can rise instantly.”

The first attack of this type happened on March 16, 2016 in Grozny, the capital of Chechnya. Igor Kaljapin, a member of the Presidential Council on human rights, the head of the Committee for the prevention of torture, was evicted from the hotel Grozny City where he spoke with reporters.  On the street near the hotel Kaljapin was attacked by 15 masked persons. They beat him up,  threw  eggs, cakes, and flour at him and sprayed him with Zelionka.

Kaljapin said to a correspondent of Novaya Gazeta:

“In spite of my appeals there was no investigation. During the year, there were seven official decisions to dismiss the criminal case. More precisely, there were filed eight appeals, seven of them were already dismissed, and now the eighth one is under consideration. All that I can say: nobody is investigating the case now and no one is going to do it, it seems.” 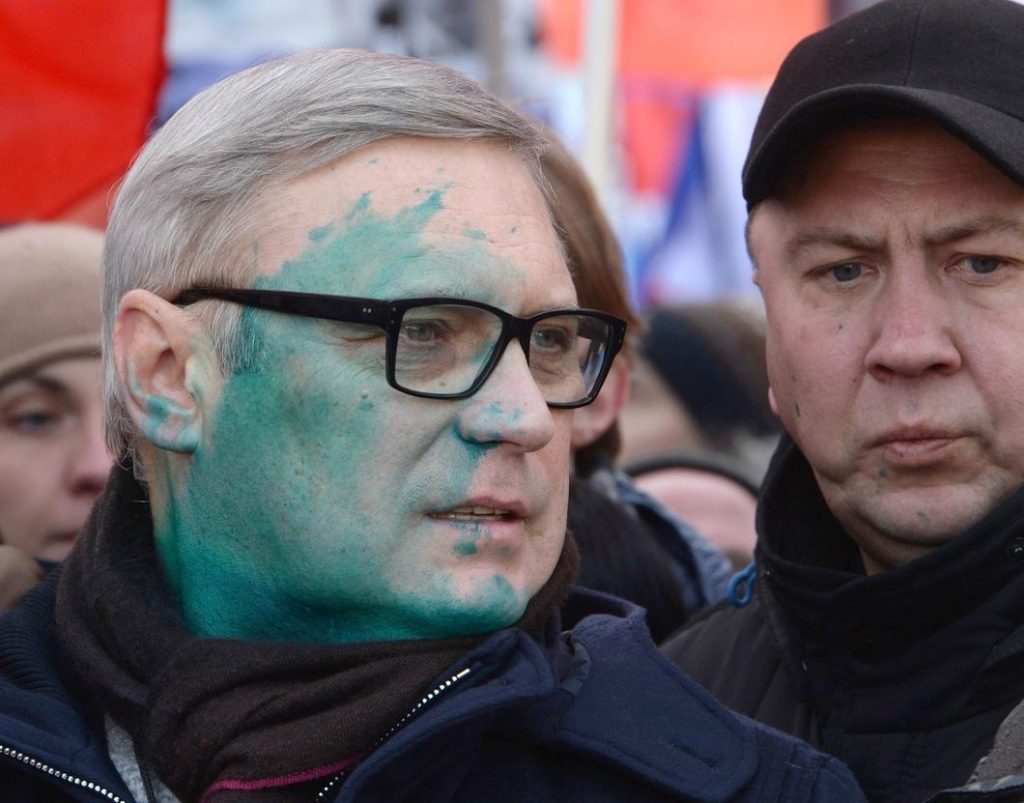 On February 26, 2016 there was a march in memory of Boris Nemtsov in Moscow.  Mikhail Kasyanov, the former Prime Minister of Russia, a chair of the political party People’s Freedom Party, the leader of the movement People’s Democratic Union, and an outspoken critic of Vladimir Putin was splattered in the face with Zelionka from a syringe. The assailant shouted: “Russia is for Putin!” Kasyanov was marching at the head of a column and continued marching after the incident. According to several media reports, the assailant was a member of a nationalistic organization “National Liberation Movement” – NLM.

On April 28, 2016, in Moscow, activists of NLM attacked the participants and organizers of the annual history contest for high school children. The contest was organized by the human rights society “Memorial”, which denounces Stalin’s crimes.  The world re-known writer Ludmila Ulitskaia, chairman of the competition jury, was attacked with Zelionka and eggs. The attackers carried posters “Had you forgotten history?” and “Memorial lies.”

On September 1, 2004, a group of armed Islamic terrorists occupied School Number One in the town of Beslan, North Ossetia (an autonomous republic in the North Caucasus region of the Russian Federation). The hostage-takers were sent by the Chechen warlord Shamil Basayev, who demanded recognition of the independence of Chechnya and Russian withdrawal from Chechnya. On the third day of the standoff, Russian security forces stormed the building with the use of tanks, incendiary rockets and other heavy weapons. At least 330 hostages were killed, including 186 children, with a significant number of people injured and reported missing. Since then every year on the anniversary of the massacre a mourning ceremony takes place in the School #1. Some participants of the ceremonies blame the tragic outcome of the event on the Russian authorities, which ordered the attack on the school.

On September 3, 2016, during the annual mourning ceremony in the school, young men attacked Russian female journalists Elena Kostyuchenko and Diana Khachatryan. Kostyuchenko was taken from school by force, and then doused with Zelionka. When Khachatryan tried to photograph her colleague with her phone, an unknown man hit her on the head, took the phone and ran away. Kostyuchenko said that all the time the policemen were nearby and saw what was happening, but made no attempts to stop and arrest the attackers. The policemen told her that they know who carried out the attack, and promised to return the phone.

Journalists are the favorite victims of the Zelionka sprayers. The known blogger and photographer Ilya Varlamov was already painted green twice.

During the latest attack Varlamov managed to make a photo of attackers. They were meeting him with flowers. The man in the hood holds his container with Zelionka in his hands.

A journalist and political activist Natalia Fyodorova had her face and hands burned with Zelionka mixed with acid. She partly lost her vision. She receives threats to be killed and her windows were shot with metal bolls. On each occasion Fyodorova called the police. Several times investigations were started on her claims, but then stopped.

As you can see Zelionka is not the only weapon used by attackers. Julia Galjaminova, a Duma candidate from the liberal party Jablako had her car tires cut by unknown persons. The Deputy of Duma, the famous writer Sergei Shargunov’s apartment was set on fire. Shargunov supports Putin on most issues. But when he voted against one of the proposals of the ruling party, the punishment followed immediately.

On August 20, 2016, two strangers approached a popular journalist, a correspondent of Novaya Gazeta, Yulia Latynina, in one of the central Moscow streets, and poured feces on her. Then the attackers fled on a motorcycle.

Immediately after the attack, Anatoly Yakunin (back then the head of Moscow Police, now the head of the Operational Department of the Ministry of Internal Affairs of the Russian Federation) called to the editor-in-Chief of Novaya Gazeta. He assured the editor that the attack will be operatively and qualitatively investigated and the perpetrators will be brought to justice. More then half of the year has passed, but the investigation has not progressed, the attackers no identified.

“… The practice of delegating the acts of violence to the ‘volunteers’ is aimed to make us confused whether the Kremlin is behind it? And to what extent it is just the initiative of those who want to demonstrate their loyalty to Kremlin?

So, I’d like to offer a very simple formula: if the crime is not investigated, it means that in fact Kremlin is an Accomplice, or even an Organizer of the crime”.