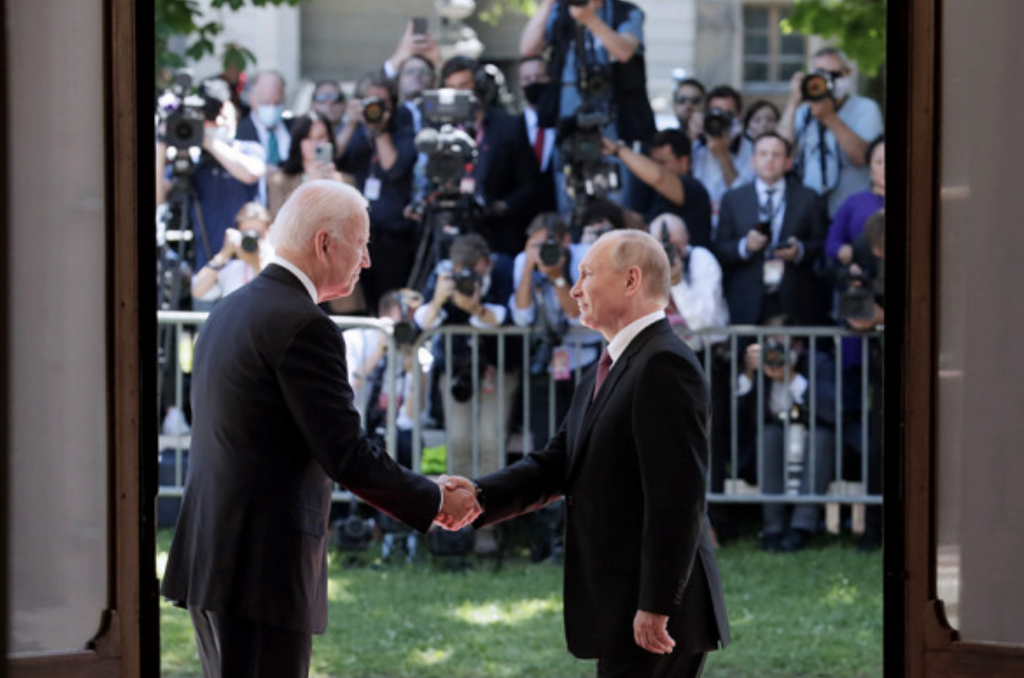 Official governmental Russian media and most oppositional media present the Biden-Putin summit in Geneva as the obvious Putin’s victory.

“The United States agreed to a dialogue with Russia in Geneva due to concerns about a potential nuclear threat,” said Alexei Pushkov, chairman of the Federation Council commission on information policy and interaction with the media in his interview to a popular website Gazeta.Ru.

“Our latest nuclear weapons and strategic weapons are of great concern to the American administration. I think this is one of the reasons why Biden wanted this meeting with Vladimir Putin: the United States lagged behind us in the development of a whole range of weapons – supersonic weapons, weapons equipped with nuclear warheads and other types. Here the Americans are lagging behind us, and when they lag behind, they start to get nervous,” said Pushkov.

“The meeting was important from political and from psychological points of view: the parties agreed not to bring their contradictions to the point where a new Cuban missile crisis and a military conflict between the two major nuclear powers could follow – this is the essence of this summit.”

Here is how a well known political commentators commented on the event:

“The Russian-American summit in Geneva ended yesterday on a positive note and generally justified the lowered expectations. No one promised a breakthrough, it didn’t happen. (…) But an uncontrolled further deterioration of relations should not happen; even positive dynamics are possible if the promised interdepartmental dialogue is resumed.

“Both leaders got approximately what they wanted from the meeting, although Biden is politically vulnerable to criticism from the right, and he has to put in more effort to convince the American public and the media (at the press conference Biden was pretty battered) that he achieved a result that is in the interests of the United States. Vladimir Putin has no such problem.

“The President of Russia can take credit for having managed to move towards the main goal of the Russian Federation in relations with the United States – the transition to respectful hostile relations from the disrespectful ones existing today. The Russian leadership wants the United States to treat them as American leaders treated members of the Politburo of the CPSU Central Committee in the 1970s – respectfully, without personal insults and personal sanctions, without questioning the legitimacy of their full sovereign power in Russia, and without lectures on democracy but holding regular summits and high-level meetings with them to discuss solutions for the rest of the world.”

“It is pointless to argue how the talks between Putin and Biden ended. We don’t know anything about this. One can speculate about what their separate press conferences were like. Well, first of all, it’s understandable why they were separate. These were press conferences from different and generally non-intersecting worlds. Biden and Putin had the opportunity to perform each of their solos.

“What Putin was saying could be considered true by viewers of the Russian governmental TV First channel. For Biden and the world press, all that looked like a complete and frank lie. And even just listening to that and not objecting (in case the press conference would be joint), Biden would compromise himself and get a hail of accusations, or he would have to refute every proposal and get involved in senseless altercations.

“On the other hand, Biden’s separate press conference looked very nice. Biden said that he explained to Putin his vision – that a democratically elected government is of a tremendous value, as well as human rights and freedom of speech. And that instead of cyberattacks and interference in elections, it is much better to find a basis for cooperation and mutual understanding based on a common desire for good and prosperity.

“Of course, to communicate all these thoughts, Biden did not need to fly to Geneva. He could say this in front of any tree in his garden with great success. Because President Putin not only does not believe in all this, but does not even believe that Biden does.”

“Putin sees himself as a vigorous, wise, witty and convincing patriarch of world politics, whom everyone must listen to and, moreover, not try to argue or demand proof of anything.

“To understand some of the oddities in Vladimir Putin’s public speeches, it is important to remember: he has long given up on everyone who does not like it, and always appeals only to his nuclear electorate – to whoever and wherever he speaks publicly. This calculation is generally correct: critics and haters will either always vote against, or will not go to any elections at all, so what’s the point of trying to prove something to them? But the nuclear electorate will come and vote, and therefore only they need to like it and he needs to send greetings to them on every occasion.

“Despite the fact that the interview was given to Americans, Putin, of course, knew that he would be quoted in Russia and endlessly repeated the most important or just witty passages. How it all sounds in English – in Russia very few will know, but in the presentation of the Russian media everything will turn out as it should: Putin, in a simple, popular way, explained to these arrogant Yankees that they are not in the position to judge Russians, there is nothing to blame on the mirror if the face is crooked.”

“In general, watching Biden’s press conference leaves some awkwardness, as from a scene in which an “intelligent” boy (an elderly boy, yes) has to tell how he talked to the most famous school bully. He needs to explain how firm he was, how well he showed himself, etc., that is, in every possible way to convince the public that he did not pass up in front of the bully.

“But the bully does not need to prove anything like that, he already has a reputation. And in this story, what and how he said, what he explained and so on, one can already feel the precariousness of the public position, it seems to me. Putin has a head start, he does not need to think about explanations. For him, the fact of meeting is already an improvement in his own position.”

“In diplomacy and geopolitics, symbolic moments are also important. And for Russia, where the question ‘Do you respect me?’ (popular expression in Russian hoodlum vocabulary. V. Ts.) became almost a part of the genetic code, this moment is especially important.

“In this regard, the Geneva summit was undoubtedly Putin’s victory. The United States dealt with Russia on an equal footing. A visual illustration of this was the flags of the two countries, which the attentive owners used to decorate the bridge leading to the place of negotiations and shown in all the stories of all world TV channels.

“It is precisely this kind of communication that Moscow has lacked since President Obama began to disparagingly talk about Russia’s ‘torn to shreds’ economy. It is absolutely not necessary to communicate with the Kremlin in such a tone. You may not love him, but he must be respected. Unlike Barack Obama, Joseph Biden’s team seems to have understood this.”

“It seems, as expected, that Putin is already successfully ‘selling’ the summit as his own success.”

“I made a titanic effort to listen to Putin’s press conference in Geneva. I usually avoid such feats because I don’t believe a word of the perpetually lying character. The general impression is that of the editorial of the Soviet ‘Pravda’.

“I listened to Biden with pleasure. Human speech. He spoke to the point.

“In general, it is clear that Putin won at this point. For him, window dressing and show-off are the most important things, and here they communicate with him not as with a hoodlum, but as with the head of a great power. He is allowed to be rude to the whole world and further.”

Still there were some commentators that praised the position of president Biden. More comments of this type could be found in Ukrainian media than in Russian.

This opinion was expressed by ex-Minister of Foreign Affairs of Ukraine Volodymyr Ohryzko in an exclusive commentary to Ukrainian website OBOZREVATEL.

“Biden has clearly stated the position – both his own and the West’s. It consists in the affirmation that there cannot be concessions on the issue of territorial integrity and independence of Ukraine.

“This does not mean that the collective West will start a war with Russia so that Ukraine can resume its territorial integrity. But this is another and very thick red line for Putin. It is clearly stated to him: if everything remains frozen, there will be no tough things. If the situation will worsen and there will be such Russian action as those that we have already observed and seen, then we warn you that we’ll act too.

“It was a necessary warning to Russia – what will happen if Putin does not listen to this. He was given 6 months to think and take concrete actions. This is the key result of the meeting for Ukraine.”