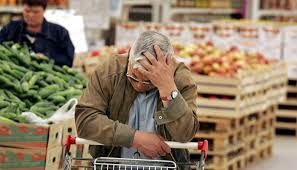 Russian media presents a lot of contradictory prognoses for the future of the Russian economy.

On one hand, TV and the most popular official publications keep presenting to public messages of the type below, published by the site vesifinance.ru:

“President Vladimir Putin positively assessed the state of the Russian economy, the Kremlin website reports. The President noted the advancing dynamics of industrial production, consistently low values ​​of inflation and unemployment, as well as the stability of the financial market.”

On the other hand representatives of opposition tend to present the current state of the Russian economy as catastrophic.

Let’s start with the presentation made by a source free from Russian political reasons. Here is how Reuters describes the situation:

“Russia’s economy will hit some speed bumps in 2019 and inflation will rise, a Reuters monthly poll showed on Thursday, due to risks of new sanctions, a weaker rouble, and a planned tax increase.

“Russian economic growth has been below the global average in the past few years, hampered by a weak and volatile currency, a drop in oil prices, and by sanctions first imposed by the European Union and the United States in 2014 after Russia’s annexation of Crimea …

“The central bank had to raise rates twice in the second half of 2018 in a pre-emptive move to avoid a spike in inflation. But the Reuters monthly poll showed analysts expected inflation to exceed its 4 percent target and to accelerate to 5 percent by the end of 2019.”

Below is the diagram showing the difference between the real inflation in Russia at the end of 2018 and the previous expectations that Russians had for this date. The diagram was officially released by the Accounting Chamber of Russia on January 3, 2019:

On December 19, 2018, the official website of one of Russia’s largest media holdings RBC published the new predictions for 2019 of the Chairman of Central Bank of Russiå Elvira Nabiullina:

“At its peak in March-April, annual inflation could exceed 5.5% or even reach 6% (…) Therefore, we are raising the key rate. Now, in conditions of increased risk, it is especially important to act proactively.” 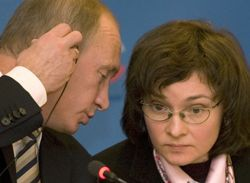 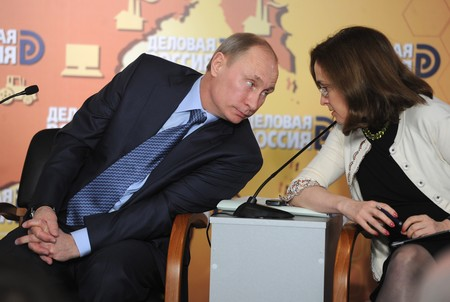 The head of the Central Bank of Russia Elvira Nabiullina is with Russian President Vladimir Putin.
She was Putin’s economic adviser between May 2012 to June 2013 after serving as Minister of Economic Development and Trade from September 2007 to May 2012.
Elvira Nabiullina is the only Russian woman who was included by Forbes in the list of the most influential women of 2018.

Right before the New Years celebration, Russian media published some articles with especially dark prognoses for the coming year. Here are the quotes from some of them:

“Next year everything will be more expensive. Essential goods and those goods for purchasing of which people usually save for a long time: real estate, cars, and so on. However, wages will not grow as rapidly, so you should prepare and learn to manage finances as efficiently as possible.”

The head of the Rosselkhoznadzor (state agricultural office), Sergey Dankvert, warned on the website Newizv.ru of the risk of the jumping of the purchase prices for milk. According to him, this jumping is expected to happen in April 2019.

Milk is not the only food product for which the price is growing.

The ING Group is a Dutch multinational banking and financial services corporation headquartered in Amsterdam. The Chief Economist of ING Group for Russia Dmitry Dolgin indicated:

“Rising food prices continue to accelerate inflation in Russia. According to Rosstat, last week’s prices on the average for the country increased by 0.21%, and since the beginning of the month – by 0.29%.”

Another article published by the same Newizv.ru site informs that the cost of the residential real estate in Moscow will jump in 2019 by 15-20%.

The site lifehacker.ru informs that costs of housing and communal services will also increase in 2019. The site explains that starting January 2019, several regions will switch to a new waste management approach. Companies will be created that will be responsible for the removal and disposal of garbage. As of now, the fee for the garbage collection is included in the bill for the maintenance and repair of the housing stock. Under the new plan, the fee for the garbage disposal will be separate. And the service of the regional operator will be billed depending on the number of residents. Also, the owners of land and garages will have to pay for the garbage collection – all this can lead to an increase up to seven times in payments for garbage collection.

State published newspaper Izvestia, which presents itself as a national newspaper of Russia, published even more depressing prognosis for 2019:

“The Ministry of Labor predicts the dismissal of more than 230,000 Russians in 2019. Most at risk are workers of banking sector, employees of trucking companies, employees of mining companies and computer manufacturers.

“Experts of the Ministry of Labor surveyed 46,000 companies that employ 12 million people, and they found areas of mass layoffs, expected in the first half of 2019.

“According to the study, 30,500 employees of the banking sector may soon be forced to look for new jobs. In second place, 27,700 employees of trucking companies who are at risk. Next are the manufacturers of electrical equipment and computing, 16,600 people. In the mining industry, 14,400 people are at risk of being laid off. At the end of the list in descending order are manufacturers of heavy equipment, cars, and building materials. There are more than 23,000 people in the country who are going to lose their job in 2019.”

Thus among other explanations of coming layoffs, one of the biggest Russian web portals Rambler quotes an explanation of the Professor of the Department of Labor of the Russian Presidential Academy of National Economy Lyubov Khrapylina:

“Some companies are forced to go for mass layoffs due to the fact that their products or services are not in demand. It is possible that entrepreneurs initially took up unprofitable direction, without conducting thorough marketing research”.

Also, Rambler connects the rise of product prices with newly introduced labeling of products in Russia.

This August, the newspaper Izvestia wrote that government proposes to obligate manufacturers to indicate on the labels of their food products the content of fat, sugar, salt, and other ingredients. Some actions to fulfill that plan are already started.

From December 26, products containing genetically modified organisms (GMOs) should be marked with a special sign in Russia; the mark is applied to the package if the content of GMO in the product exceeds 0.9%.

Rambler explains that labeling is needed to protect against counterfeit and falsification. It will also help the business to optimize workflows and get rid of paperwork. The consumer will be able to scan the code of any product using a mobile application and it will show all the information about the manufacturer, delivery, and receipt to the store. But due to the introduction of such a system, manufacturers have to buy new equipment and invest in installing software that, albeit slight, will also lead to higher prices.

Finally, explains Rambler, in 2019, all products in plastic packaging can become more expensive because the government is discussing an increase in environmental fees, and the cost of disposing of plastic can be 2.7 times higher.

Do Russians believe such explanations of the increased cost of living?