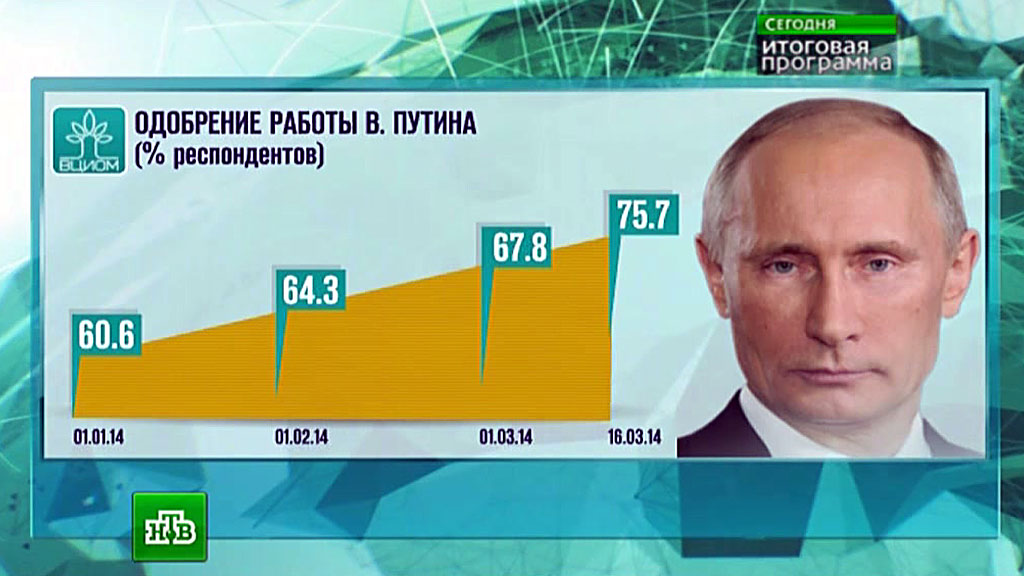 Screenshot of the Russian TV program:
Rating of Putin’s activity approval by Russians in 2014.

On May 25, 2019 the Kremlin sociological service VTsIOM published a survey about public confidence in President Vladimir Putin that was given much attention by the Russian media. The confidence rating was 31.7%. This was the lowest figure for all the 13 years of this indicator.

Right after annexation of Crimea in March, 2014, the trust rating of Putin was 85%.

Opposition media, discussing the latest figure, came to the conclusion that the change of the public opinion was caused by raising the retirement age, contrary to Putin’s previous public promises, as well as the decline in real incomes of the population over five consecutive years that, some believe, virtually destroyed the “post-Crimean consensus”.

The Kremlin was puzzled: Why was the trust rating of the president falling, while the level of electoral support was growing, and they demanded an explanation from the sociologists.

On May 31, the Kremlin sociological service VTsIOM published the results of the survey made by a new method. Instead of an open question about whom the respondents trust, they asked a closed one: “Do you trust or distrust President Putin?” After that, the trust rating of the head of state rose to 72.3%.

However, in June, sociologists reported a new downgrade of the president’s rating. According to calculations using the new methodology, on June 9, 71.7% of respondents said they trusted the head of state. A week earlier, on June 3, 72.4% trusted Putin. And according to the old survey methodology, the trust rating of the president from June 3 to June 9 reached 31.1%, compared to 31.5% in the previous reporting period.

Although the apparent one percent fall off, of questionable statistical significance, some Russian commentators treated the change as an indicator of tendency.

At the same time, May 25, 2019, together with the publication of the first survey discussed above, VTsIOM published another survey, which presented a surprising figure. Only 19% of Russians believe that the place of Russia among the leading world powers can be ensured primarily by a strong army.

For comparison, five years earlier – at the peak of militaristic propaganda after the start of the war with Ukraine – 42% of Russians (twice as many) indicated a strong army was the most important factor in returning Russia as a great world power.

Recently, what is equally important according to 45% of Russians, is that the new global goal of Russia includes the country among the 10 to 15 most successful countries in the world. Now the polls indicated the desire to return Russia to the status of a superpower was the paramount concern of only 34% of the respondents, as compared to the previous 42%. It is to this abstract goal in contrast to the goal of an increase of the standard of living that Putin’s policies have been directed since 2014.

In response to other questions, 43% of Russians believe that Russia can become one of the leading countries of the world primarily due to a higher level of citizens’ well being and another 33% due to a developed economy.

The website Spectr.Press published an article entitled “Refrigerator’s revenge”.
Here is a quote from the article:

“Actually, these percentages can be safely combined: Without a developed economy there are no chances for a high level of well-being of the majority of citizens, and not a bunch of oligarchs, like now.

“Most Russians believe that a high standard of living is more important than the status of a super-state, that a powerful army in itself does not lead the country to greatness. They believe: It is better to feed us with food, rather than with cartoons and horror stories about the new, ultra-modern weapons that will destroy everyone, as the Russian authorities and the President personally do.”

The data of the Rosstat report on the financial situation of Russian households for the fourth quarter of 2018, released on May 28, shows the mood of people consistent with VTsIOM polls: Almost half of Russian families (48.2%) only have enough money for food and clothing. Worse yet, 15% can only afford to spend money on food – they have nothing left over to spend for clothes and shoes, as well as for utilities.

Apparently segments of these 63.2% of Russians may be pleased to watch the constant curses addressed towards Ukraine on TV or to listen to the stories about Russian ultra-modern rockets. But “greatness of power” is not exactly the priority of their lives.

The author of the article in Spectr.Press concludes:

“It is hardly possible to say that great-power chauvinism and craving for the empire completely disappear from the Russian mass consciousness.

“But now, according to Rosstat, 19 million Russians are living below the poverty line. And if any next government will be able to raise the living standards of people, create jobs with decent wages, also re-establish relations with the world by giving up confrontations, Putin’s successors will obviously be forgiven for the radical turn in foreign policy.

“Moreover, an increase in economic power clearly will not lead to the diminishing of Russia’s foreign policy role in the world. Just in order to remain an important world power, it is not necessary to be a global scarecrow, which Putin’s policy is rapidly turning Russia into.

“The Russians, at least the overwhelming majority, are hardly yearning for democratic institutions and human rights. But the fact that the standard of living is more important for them than the abstract status of a great power is obvious.”