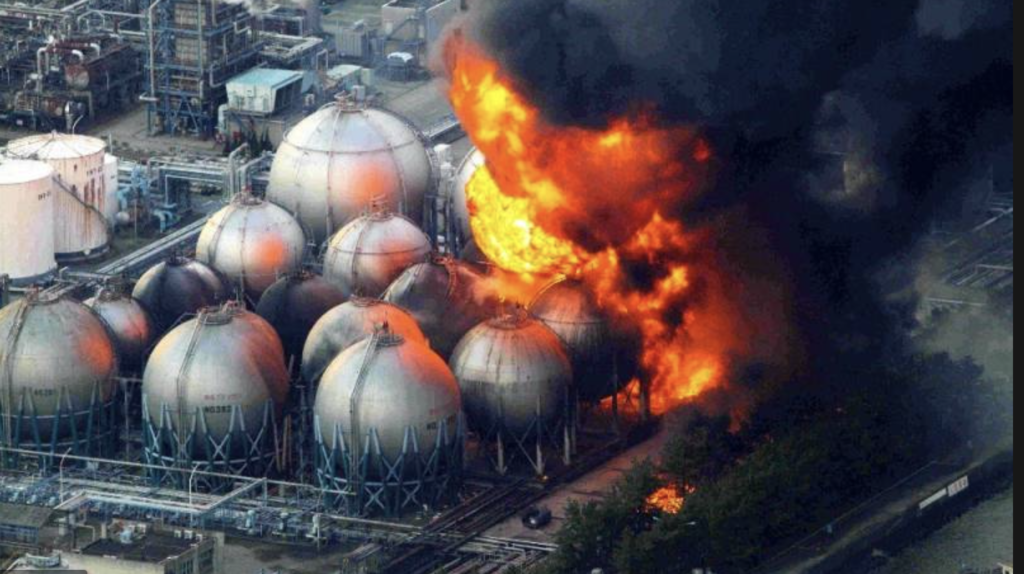 In the morning of August 7, 2022, the 4th power unit of the Ukrainian Zaporizhzhya nuclear power plant, the Largest in Europe, now under Russian occupation, stopped working. It is on fire. It was disconnected from the network as a result of shelling carried out on August 6, afternoon.

“Speaking at the European Parliament hearing, the head of the International Atomic Energy Agency Rafael Mariano Grossi said the agency’s main ‘preoccupation’ remains Zaporizhzhia, Ukraine’s largest functioning nuclear power plant, which has been under Russian military control since early March. ‘We have been living in a very fragile situation,’ he said, explaining that the plant is currently run by Ukrainian state nuclear operator Energoatom but occupied by Russian troops.

“Grossi added that Russian nuclear experts are also on-site, but said their function ‘is not entirely clear.’ Their presence ‘goes against every safety principle that we have and creates the ‘potential for disagreement, for friction, for contradictory instruction,’ he warned.”

According to TSN, one of the most popular news programs in Ukraine, the plant was shelled on August 6 by Russians.

Russian media immediately started blaming the Ukrainian armed forces for the shelling. It seemed logical: the occupying army has now turned a nuclear facility into a military base. The British Ministry of Defense suggests that the Russians are using the nuclear power plant as a cover and springboard for shelling the nearby city of Nikopol.

According to the British statement, Russian troops are using the protected status of the nuclear power plant to reduce the risk to their equipment and personnel from nighttime attacks by Ukrainian forces.

This is a direct, serious, and irresponsible violation of international nuclear security, the head of European diplomacy, José Borrell, is convinced. The EU condemns Russia’s military activities around the Zaporizhzhya nuclear power plant. He stated: “This is yet another example of Russia’s disregard for international norms.”

According to Businessinsider.com, “Ukraine has been reluctant to strike the plant, fearing it could cause a major accident or disaster”

Trying to prove that the plant was shelled by Ukrainians, Russians betrayed the truth by their actions: before the attack, all Russian representatives of their state operator Rosatom were hastily evacuated from the plant. Only Ukrainian workers stayed at the plant.

Oleksandr Starukh, head of the Zaporizhzhia Ukrainian administration, called it a prepared provocation that carries a great threat:

“Two power lines were damaged, and the 4th power unit was disconnected from the network. There is no big danger yet, but I must state that all our plans for the evacuation of Ukrainians are almost impossible to implement in such conditions as today,” says Oleksandr Starukh.

According to some sources, the occupiers could mine the ZNPP or the area around the nuclear power plant. Footage showing how Russian military trucks drive into the territory of the station and unload some kind of cargo was published on the Internet.

Ukrainian operator Energoatom notes that Ukrainian personnel at the station work literally at gunpoint and make every effort to ensure that no accidents occur there. There are now up to 500 Russian military personnel on the territory of the ZNPP. And the fact that they have their artillery near the sites does not need special video evidence. Residents of neighboring Nikopol feel this every day.

To do everything to expel the Russians from the Ukrainian nuclear power plant is the task of the world, Ukrainian President Volodymyr Zelensky believes. In his evening address, he once again emphasized that the stay of the invaders at a nuclear facility and turning it into a military base is an act of terror.

“Russian military control of Zaporizhzhia in eastern Ukraine is also raising questions about the status of nuclear material at the site. Because IAEA experts currently don’t have access to the plant, they can’t perform regular nuclear safeguard activities, including physical inventories and monitoring, according to Grossi.

“Without that, we cannot ensure to the international community where the nuclear material is or what’s happening with it.”

Ukraine’s nuclear operator Energoatom has issued multiple warnings about potential safety issues after the Chornobyl site came under the control of Russian troops, which have since left. In March, it said a power cut meant cooling systems would be shut off, increasing the risk of radioactive substances being released.