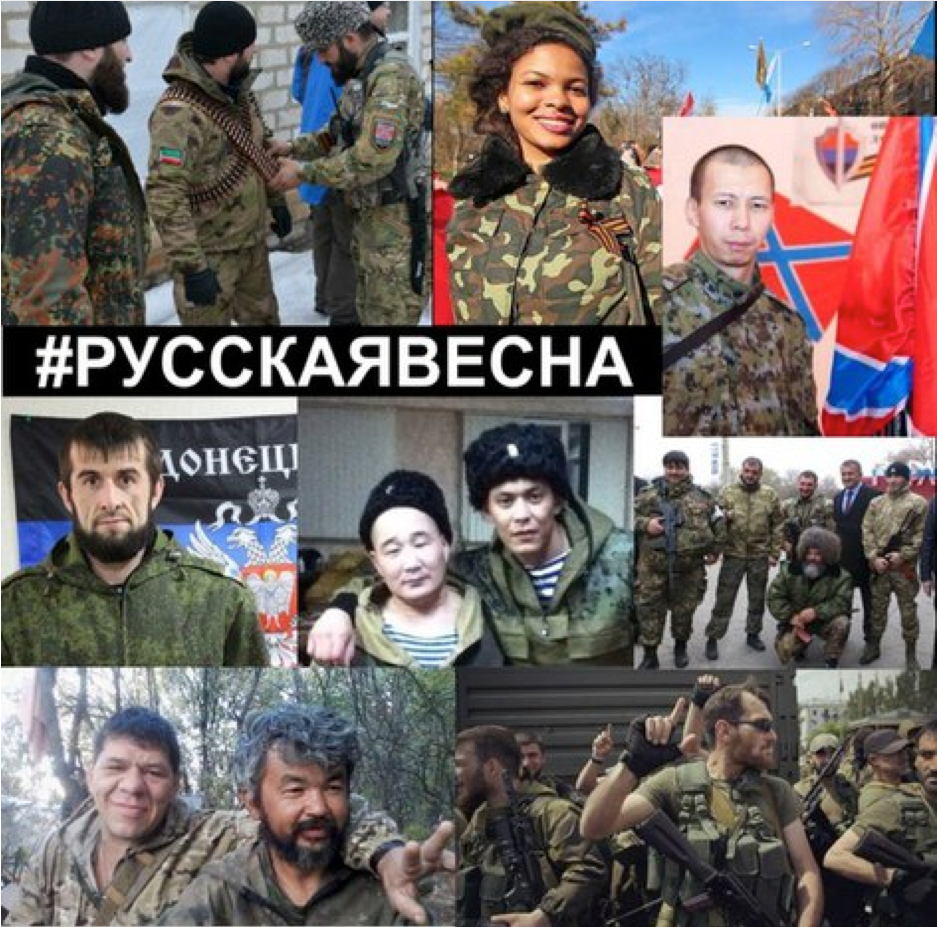 “Russian spring”. Photos of “the volunteers” fighting in the regiments of Donbas separatists, published on the Russian Nationalistic website Stormfront.org
(https://www.stormfront.org/forum/t1075678-11/)

Here are several typical statements made by Sergei Markov, one of the most popular Russian masters of propaganda, Director of the Institute for Political Studies :

“The power in Kiev is controlled by people who hate everything Russian. For the destruction of the Russians in Ukraine they receive powerful support from outside… The United States has the main supporter of  the coup d’état in Kiev on February 2014, and to the coming to power of pro-American puppets. Without America, this coup simply could not happen.

“We need to state quite openly that we support the Donbas militia on the grounds that the Kiev authorities are conducting an outright genocide of the Russian population in this region. And we have every right to prevent the massacres of civilians… We cannot abandon this territory and leave the people who live there to the mercy of Ukrainian nationalists.”

“I think that the American leaders in Washington know why their special services made a coup in Ukraine, why they brought to power Nazis who massacre the population over there.”

Most Russians get their information from state TV, so they accept the absurd notion that the Russian help and presence in Eastern Ukraine are necessary in order to defend the local population from Ukrainian Nazis, who are in tuirn  controlled by Americans.

Meanwhile, Russian and Ukrainian Internet lately presents a lot of material showing Russian nationalists – extremists and neo-Nazis –  fighting in the Eastern Ukraine on the side of the separatists and against the Ukrainian army.

Among fighters for the Russian ideas are activists supported by the Russian government and criminals wanted by Russian police.

Some of them are just ordinary young hoodlums, some are well known politicians.

The most famous Russian fighting in Donbas is Alexander Barkashov, the creator and leader of “All-Russian civic patriotic movement Russian National Unity” (RNU). 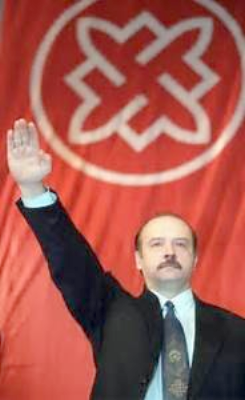 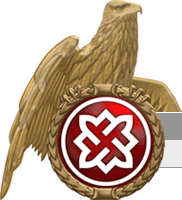 The RNU was founded in October 1990. At the peak of its popularity in 1999, RNU was estimated to have 100,000 active members all over Russia. Members wear black and camouflage uniforms; the group adopted a red and white modified swastika emblem, openly expressed admiration for German national socialism and publicly celebrated the rise of the Nazis. 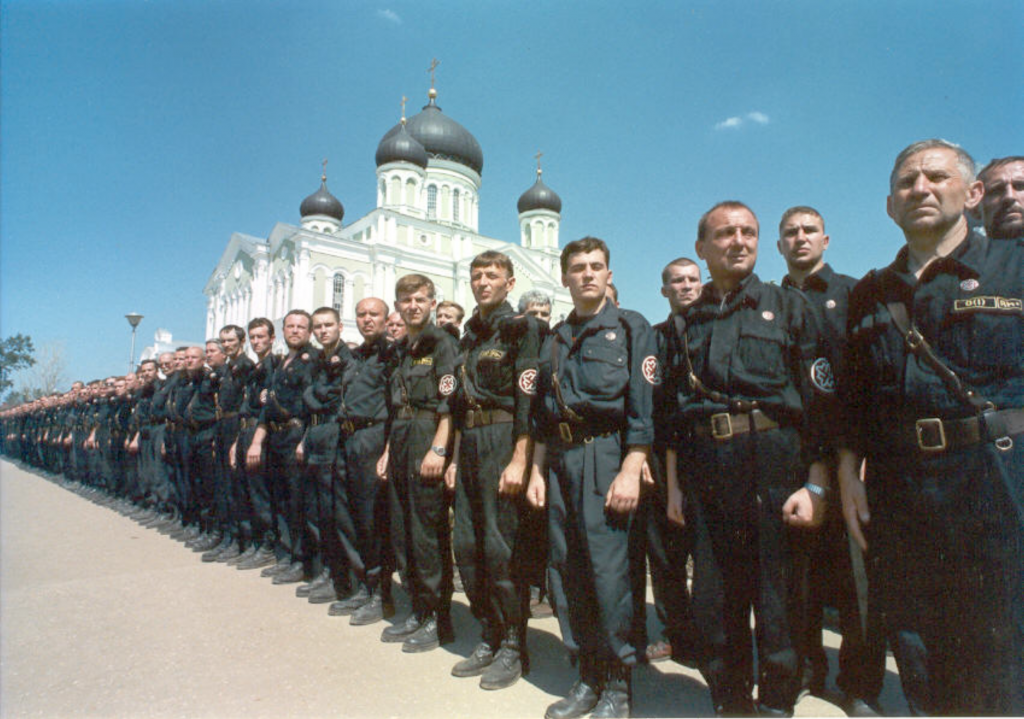 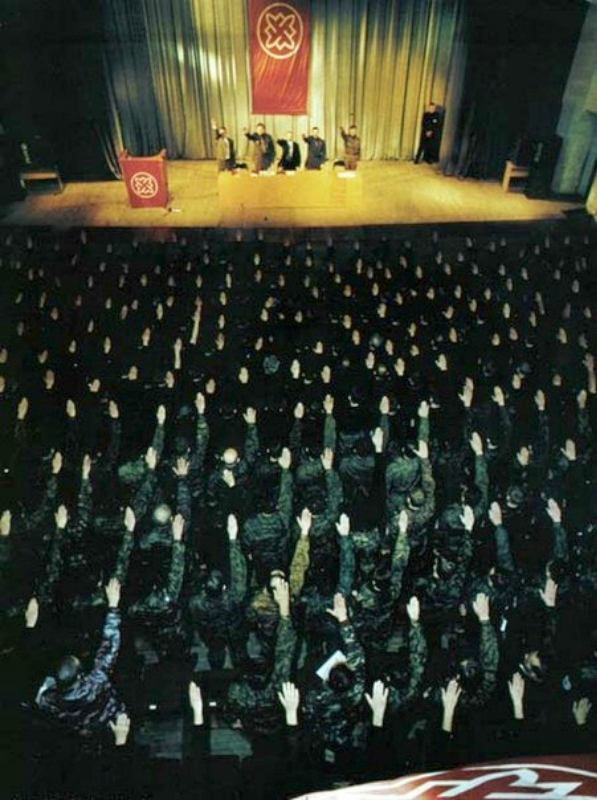 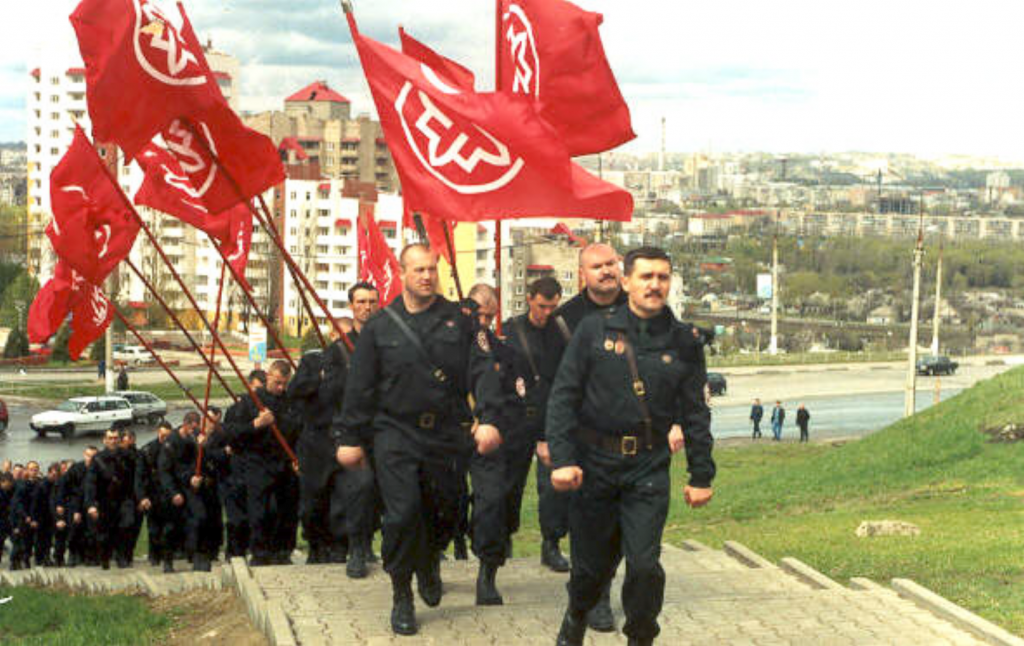 During the Russian constitutional crisis of 1993, Barkashov led RNU fighters in their defense of the Russian White House against Boris Yeltsin‘s forces. Barkashov was imprisoned on charges of organizing and inciting mass disorder and illegally bearing arms.

In early 1994, the newly elected Duma granted amnesty to Barkashov.

In 2014, when the war in Donbas started, many of RNU members joined pro-Russian forces in Ukraine. Back then the Ukrainian Ministry of Defense claimed that a telephone conversation of Barkashov and a local Donetsk activist Boitsov was intercepted. Reportedly Barkashov said to Boitsov that he could call off the referendum on independence of the territory. Barkashov said that it is not necessary to perform referendum the legit way. He said that in the end no one would care about it. All that Boitsov has to do is to write whatever he finds suitable. If he wants, he can say that 99% of people voted for joining Russia. 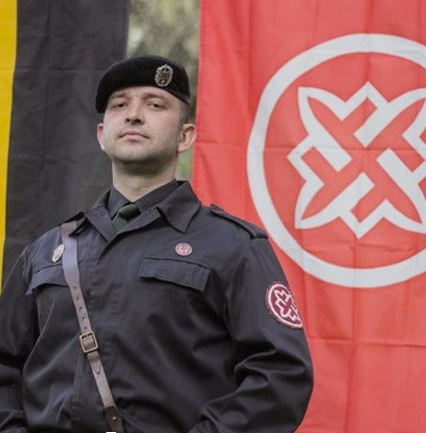 Livejornal.com published a collection of photos of 33 persons identified as neo-Nazis fighting on the side of Donbas pro-Russian separatists. (

The father and the son Barkashovs are among them.

Some of the pictures of these “heroes” are very impressive. 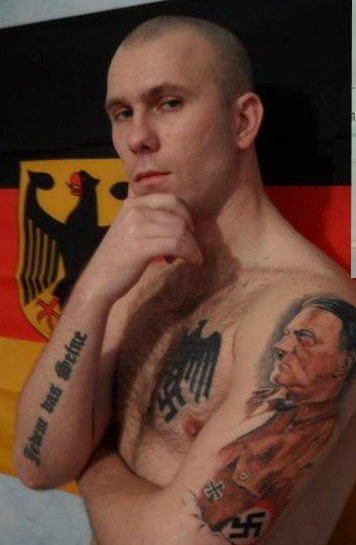 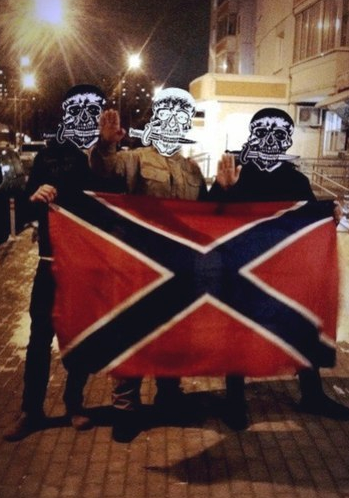 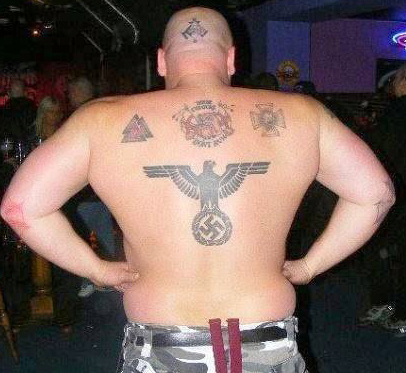 One of them deserves special attention: Alexei Milchakov from a neo-Nazi St. Petersburg organization “Rusich”. 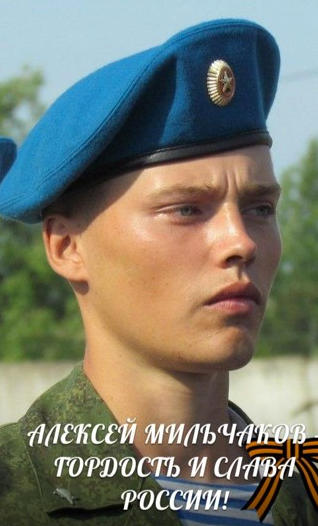 The separatists’ poster presents Milchakov as “The pride and the glory of Russia”.

Milchakov is indeed ‘famous’. One can find a lot of his pictures self  published on the Internet.

Living in Russia prior to his coming to Ukraine, he entertained himself by killing puppies, and publishing photos of the activity.

The terrorist group, in which he was fighting in Donbas used to have a Twitter account (not active at this moment) administered by Milchakov. On June 29, 2015, he posted pictures of Ukrainian prisoners of war with mutilated faces.

Another picture, made near Luhansk in September 2014, shows an ear, which was cut off from a Ukrainian soldier.

All these pictures were originally posted on Milchakov’s page in VK (Russian analog of FaceBook).  He deleted them finally, but it was too late: the pictures have  been traveling ever since across the Web.

Those, who would like to see these terrifying pictures of the activity of “The pride and the glory of Russia” can find them here:

Milchakov’s ID was issued by so called “Luhansk People’s Republic”. As can be concluded from this document, Milchakov belongs to Neo-Nazi terrorist group “Rusich”. 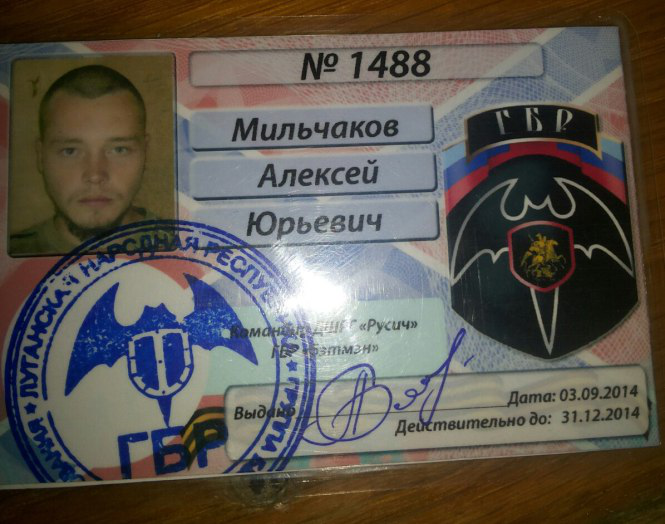 Those who would think that Milchakov only became an outlaw in Donbas or in Russia would be mistaken. Here’s Alexei Milchakov, giving an interview to Russia’s Life News channel in 2015.

Among Donbas militants there are those recognized as criminals even by Russian law. Paradoxically many of them became what they now are with the help of Russian state grants.

The patriotic and sports organization of Russian war veterans “Combat Brotherhood” had about 1,500 members and about 10,000 sympathizers.

In 2014, Combat Brotherhood received 8 million rubles for the organization of patriotic clubs.

In their application for the presidential grant it was stated that the money will be spent on “holding military sports games, festivals, exhibitions, sports tournaments”.

In all, for three years of distribution of presidential grants Combat Brotherhood and regional branches of this public organization received about 50 million rubles. 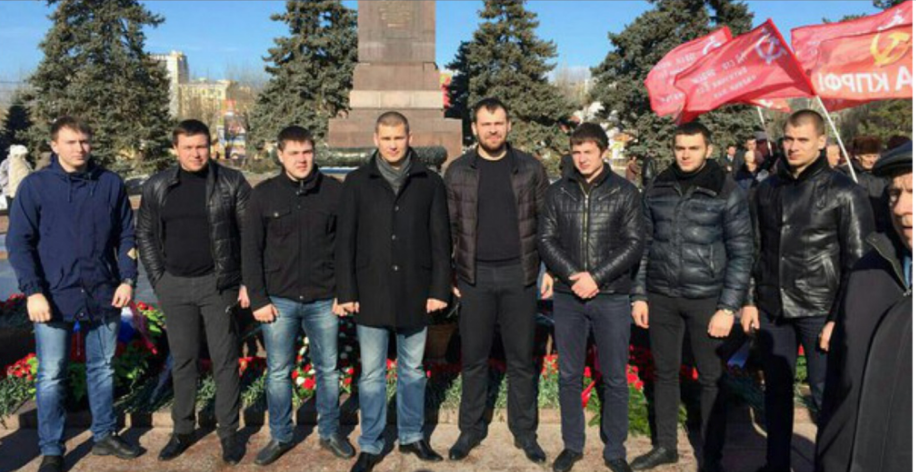 Makariev shared his plans for “Healthy Nation” in an interview:

“Our coaches are people with a strong life position, convinced patriots and supporters of our president. They support each training session with political instructions, explaining to the children what is happening in the world and what we should do about it.

“Given powers are gathering in the world against Russia and a cold war has begun, the enemies of Russia are creating tension on our borders.  For example, in Ukraine, and even in our country, the West is creating a ‘fifth column .’ We, patriots of our Motherland should be prepared for the most unexpected situations.”

An “unexpected situation” happened in May 14, 2016. A group of young people, the backbone of which was the athletes from the Healthy Nation, armed with knives, bats, brass knuckles and firearms, had a battle with the group of Tadzhik migrants. The battle took place in Moscow at the Khovansky cemetery. Three Tadzhiks were killed and many wounded.

George Makariev, wanted by Russian police, moved to Donbas with several dozens of members of his organization to create  the “People’s Army of Donbas” . Until recently Makariev acted in Donbas as a prominent politician.

On March 22, 2017, Makariev was declared an international wanted man. According to Russian law enforcement agencies, the head of the People’s Army of Donbas is now in hiding somewhere in the territory of Donbas. His deputy Vladimir Belov was abducted by separatists’ police through Russian orders and then was handed to Russian police. He is now in a cell of the pre-trial detention center in Moscow.

“Apparently this kind of patriotism (meaning patriotism of Makariev) ceases to be an indulgence, and the Donbas is ceasing to be a ‘gray zone’ inaccessible to Russian law enforcement.”