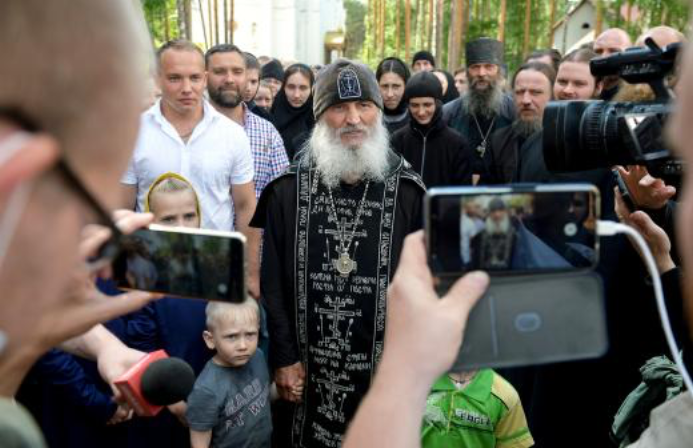 Sixty-five year old monk Father Sergiy Romanov is now one of the most talked about persons in Russia. In May 2020, he attracted nationwide attention by creating in Ural Mountains a kind of clerical state, controlled only by him.

He started releasing videos, in which he, speaking from his monastic cell, where icons placed alongside pictures of Russia’s Czar Nikolas II and Soviet dictator Josef Stalin, denounced President Vladimir Putin as a “traitor to the Motherland”, serving a Satanic Jewish “world government”, and dismissed Russian Orthodox Church Patriarch Kirill and other top clerics as “heretics” and “enemies of God and Holy Mother of God” who must be “thrown out.” He was urging all Russian believers to disobey church leadership’s order to stop church services during the pandemic.

The monk called for an all-Russia assembly to put Putin, Patriarch Kirill and his entourage on trial.  “We can’t allow that wolf pack to mangle Russia and the neighboring nations,” he said.

The church banned the monk from ministry in May, but he is continuing preaching.

He had taken control of the convent that, in 2011, he had helped build near Yekaterinburg, the capital of Urals region. By 2020, there were four churches on the territory of the Kyrtomsky Holy Cross convent and more than 500 people were living over there including novices and nuns, as well as dozens of children, cancer patients and pilgrims.

A plan was announced by Father Sergiy to build the largest Orthodox church in the world on the territory of the convent. The capacity of the structure would be 37 thousand people, height – 77 m. After Father Sergiy took control of the convent, the mother superior and several nuns left and armed guards started patrolling the site. Crowds of new believers are coming from all over Russia to join the monk.

His influence expands. By now Father Sergiy controls three large Orthodox monasteries in the Yekaterinburg region. The territory controlled by Sergiy, an area of over 247 acres, includes not only religious buildings, but also residential buildings, agricultural facilities and industrial buildings.

Scores of volunteers, including Cossacks and veterans of the separatist conflict in eastern Ukraine are coming to the Urals from all over Russia, helping to enforce Sergiy’s rules in the area.

Representatives of press are rarely allowed on the territory. The media nicknamed Sergiy “Rasputin of Urals”.

Ilya Shumanov of Transparency International–Russia wrote:
“’A kind of Vatican’ is emerging near Yekaterinburg. As recent events show, the Russian Orthodox Church does not control this micro-state. Father Sergiy, who is fighting against the “satanic power” and the “Jewish yoke”, is next to God there.” 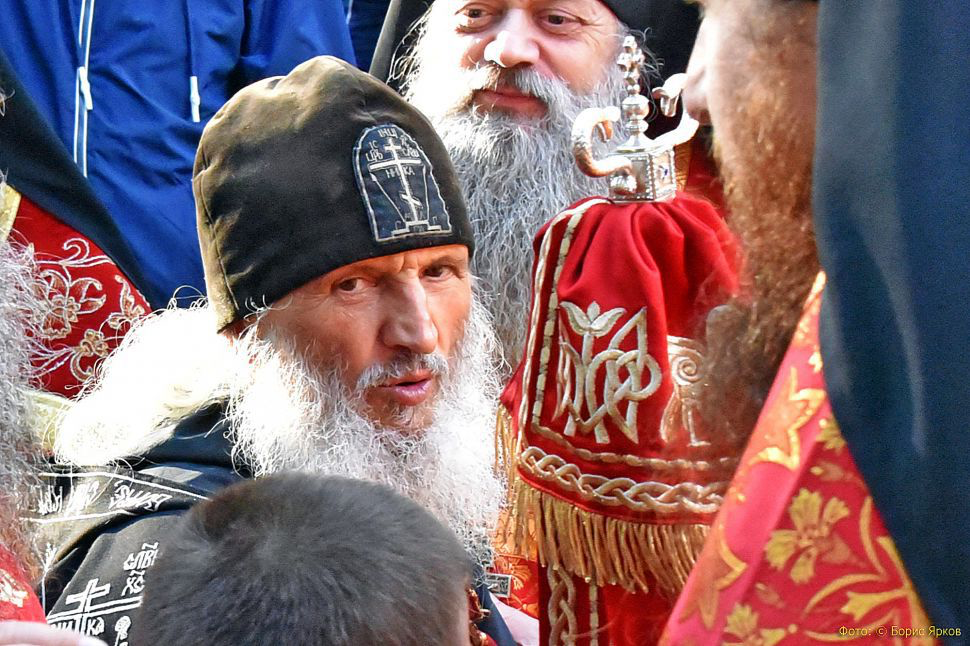 Facing stiff resistance by his supporters, church officials have appeared indecisive, lacking the means to enforce their ruling and evict the rebellious monk by force. Government also is hesitant to use force in order to stop activity of the monk, who has too many sympathizers among the Orthodox Russians.

Father Sergiy, who was born as Nikolai Romanov, served as a police officer during Soviet times, then left the ranks and was sentenced to 13 years in prison on charges of robbery and murder. After his release, he managed to join a church seminary and later became a monk.

The charismatic monk quickly became widely known for his enthusiastic efforts to open new churches and monasteries in the Urals. In his fiery sermons, he denounced alleged plots of the “world government” and glorified Russia’s last czar, Nicholas II, who was killed by the Bolsheviks along with his entire family in Yekaterinburg in 1918.

For years Father Sergiy has been the most visible and outspoken of a few ultra-conservative Russian Orthodox clerics who have challenged the church leadership. The top church hierarchy has avoided conflict with the monk until he openly defied the Kremlin and the Moscow Patriarchy during the coronavirus pandemic.

As contagion engulfed Russia, Father Sergiy has declared the coronavirus non-existent and denounced electronic passes introduced in Moscow and some other regions calling the outbreak “Satan’s electronic camp.” Following the wide spread conspiracy theories, the monk has described the vaccines being developed against COVID-19 as part of a global plot to control the masses via chips.

He also urged believers to disobey the closure of churches during the nationwide lockdown. Orthodox churches across Russia were closed to parishioners on April 13 amid a quick rise in COVID-19 cases.

In his videos, Father Sergiy warned church officials that they will need to seize the monastery by force to get him out. “I’m calling on all Orthodox believers to come to defend the monastery,” he said in his latest video. “I will not leave the monastery.”

On July 12, 2020, Sergiy demanded that Russian President Vladimir Putin transfer powers to him “on the international level”, stating that in three days he would be able to restore order in Russia, claiming that for this he had supporters “both in the army and in the navy; in all government structures, and in the peoples of multinational Russia”. In addition, he stated that otherwise he would personally declare a full-scale spiritual war on the President and “the apostate Patriarch Kirill, and the Chabad Jews, headed by rabbi Berel Lazar, who rule Russia.”

(Berel Lazar, the Chief Rabbi of Russia “is an Italian Jewish Orthodox, Chabad-Lubavitch Hasidic rabbi. He began his service in Russia in 1990.” Wikipedia)

There are a lot of people in Russia, who think that Father Sergiy is a criminal and should be punished. A typical comment: religious scholar and forensic expert Igor Ivanishko believes that in the case of Sergiy, “the police are too cautious, and it’s wrong”, since the “quantity and quality of videos on the network” that Sergiy released are already sufficient grounds to bring “a person to criminal court”. (“Novye Izvestia, 07.13.2020)

On the other hand a lot of famous Russian personalities: athletes, showmen. film stars, openly support the rebellious monk.

“Sergiy Romanov is not one person, it is a whole movement. This is really existing parallel to Orthodoxy, which includes a whole spectrum of problems that people can only solve there, and they get it. These are anti-Semitic sentiments, characteristic for the ultra-conservative part of the Orthodox and the fight against the ‘digital concentration camp.’ TIN, barcodes, biometric passports and other signs – harbingers of the ‘imminent arrival of Satan’. And now there is also COVID-19 dissidence and the fight against the ‘pandemic of disbelief’“.

Russian government remains hesitant to use its power against the “Rasputin of the Urals”.