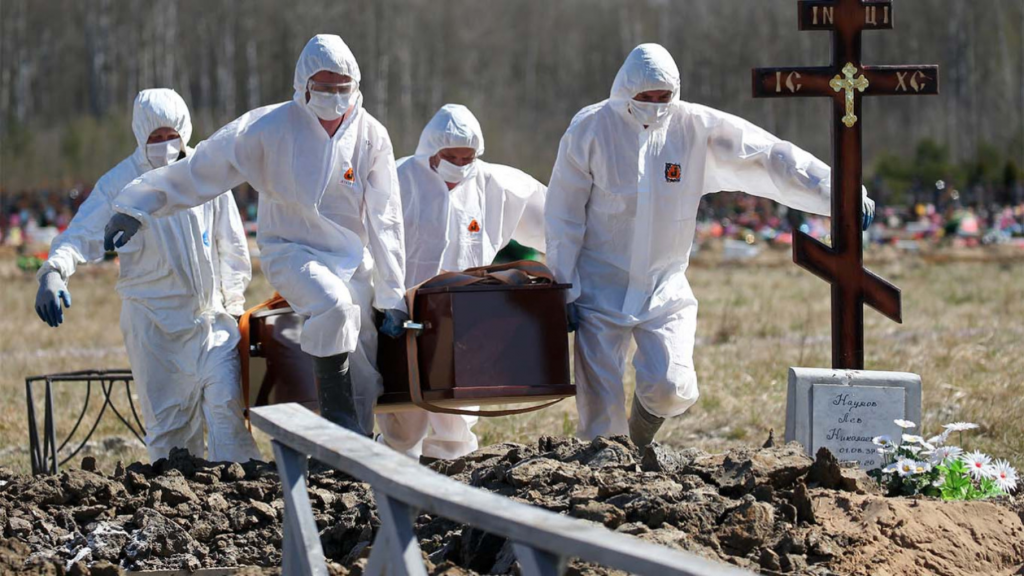 The global pandemic of the coronavirus (COVID-19) reached Russia on January 31, 2020, when two Chinese nationals tested positive shortly after returning from China. To prevent the outbreak, Russia immediately closed the border with China, which resulted in no new cases reported until March 2020, after the disease began to spread in Europe. Starting with Russian tourists coming back from Italy, it disseminated to the wider population, infecting nearly 188 thousand nationwide as of May 8, 2020. At this date Russia had the highest number of COVID-19 cases in Europe reported over the last two weeks.

Although the country has the second fastest growing outbreak in the world after the United States, its mortality rate falls far below other countries.

On May 8, Russia reported 187,859 coronavirus cases to only 1,723 deaths, with a mortality rate of only 0.9%. Suspicions are growing that Russia is undercounting its coronavirus death toll.

On May 8 the opposition newspaper The Moscow Times quoted opinions of several officials: (https://www.themoscowtimes.com/2020/05/08/russia-is-boasting-about-low-coronavirus-deaths-the-numbers-are-deceiving-a70220)

“I myself see that I have diagnosed more patients who died from the coronavirus in these past two weeks than I saw in official statistics,” said a pathologist in St. Petersburg who asked to remain anonymous.

Alexander Vanyukov, a surgeon at Moscow’s Clinical Hospital No. 52, told that he has his doubts over Russia’s official statistics. He explained that, at his hospital, which is one of 20-plus in Moscow and was one of the best prepared for the pandemic, about 10-20 coronavirus patients are dying each day.

“We will probably never know the real figures. Or, as one of our colleagues joked, we’ll find out only in about 30 years on HBO,” he said, in reference to the channel’s popular ‘Chernobyl’ series. Ironically, Russians finally discovered what is really happened in Chernobyl in 1986, only by watching this series.

According to The Moscow Times, increasing transparency by some Russian officials had shown that probably 233% more coronavirus-positive patients died than reported in the official count.

Decree signed by Russian President Vladimir Putin had declared the week from March 30 to April 3, 2020 non-working in Russia. Later Putin delegated to governors the power to lock down territories. Many Russian territories are still staying locked down. The situation is very much similar to the situation in USA. Though, there is one very important difference: until May 10 Russian government didn’t help financially neither citizens nor businesses. On May 10 finally the order was published on the government website, stating that assistance of 81.1 billion rubles (about one billion dollars) will be given to small and medium-sized businesses.

Moscow is the country’s hot spot, reporting about half of Russia’s cases. On May 8, the city’s mayor Sergei Sobyanin told TASS news agency that the city’s true number of cases is likely to be far higher then official figures and is probably at around 300,000.

The mayor extended the city’s lockdown until May 31, though he reported that industries and construction companies would be able to reopen on May 12.

Tension in Russia is growing. Small businesses are bankrupting and many Russians have no money even for food. What is most important: more and more Russians stopped believing to any information presented by government. A lot of people don’t want to follow any measures of protecting from the virus, as they don’t believe that the virus even exists. When the government reported that Russian Prime Minister Mikhail Mishustin got infected, one of anchors of Radio Echo of Moscow asked listeners whether they believe the report. It turned out that 80% of listeners thought that the report is a lie, created in order to frighten people and make them follow the quarantine rules.

“I have to observe self-isolation and follow orders of doctors,” Russian Prime Minister Mikhail Mishustin said. “This is necessary to protect my colleagues.”

As much as I remember, writers of oppositional Internet never before expressed any sympathy to Putin. Now some of them do. They realize that quitting now lockout measures in Russia is suicidal: the amount of the infected keeps rapidly growing. Still they also realize that not quitting lockout measures may ruin Putin’s popularity, so Putin probably has no choice but quit the lockout as soon as possible.

Interestingly, a lot of Russians blame the creation of the tragic situation on the openness of the Russian borders and on the ability of Russians to travel abroad.

According to this publication some Russians who have become infected with coronavirus have been harassed and threatened by public. Their stories were collected by RIA Novosti (Russian Information Agency News).
http://news.rambler.ru/community/44087348-rasstrelyat-i-szhech-rossiyane-ustroili-travlyu-zarazhennyh-koronavirusom/

According to Alena B., a resident of the Siberian city of Ust-Kut, her son was mistakenly identified as infected by coronavirus. All personal information on her family was published on social networks before the diagnosis was confirmed.
The woman, after returning from vacation in Thailand with her 16-year-old daughter and seven-year-old son, went to the clinic and was directed to go home for self isolation. On the tenth day of the isolation, the family was tested again, and all of them, including the boy, were found not infected. But information about the “first sick person in the city” had already appeared in local groups in social networks. Users published the full name of Alena B., her husband and parents, indicated their place of work and the community in which they live.

“Shoot the whole family, burn the mother, send children to the orphanage, this woman is the enemy of human society!” such messages were written in social networks about the family of Alena B.

The head of the district appeared on television and said that the test of the Alena’s son was erroneous, that the child is healthy. The degree of indignation has decreased. However, many still did not believe.

RIA Novosti noted that a similar incident occurred in Khabarovsk, where a note was hung on the door of an infected woman: “Were you going to Italy? Die, creature! Our children are suffering because of you!”

In the Voronezh region, neighbors bullied the family for a trip abroad, though the coronavirus was not even found among family members.

In Kirovo-Chepetsk, drunken men had beaten a paramedic, demanding to tell to whom he came to take a test for coronavirus.

The results of a study by the All-Russian Center for the Study of Public Opinion (VTsIOM) showed that the summer of 2019 only 8% of Russians traveled abroad for vacation, and every third Russian spent his vacation in the walls of his home, not being able to afford even vacationing within the country.

The highest percentage (10%) of Russians vacationing abroad was in 2017.
According to banks, about 10% of them went on holiday on credit.

Note, that Russian mentality concerning travelling abroad is very different from American one. The dream of going abroad is one of the central elements of the Russian culture. There is even the Russian proverb: “after one had seen Paris, one can die”, used as a title of a popular movie.

According to the 2019 survey conducted by experts at the NAFI analytical center, only 9% of Russians do not want to go as tourists abroad.
https://russian.rt.com/russia/news/668560-rossiyane-puteshestviya-strany-opros

Is it surprising that 90% of Russians who can only dream about traveling abroad hate the wealthy” who can afford it even if only on credit.