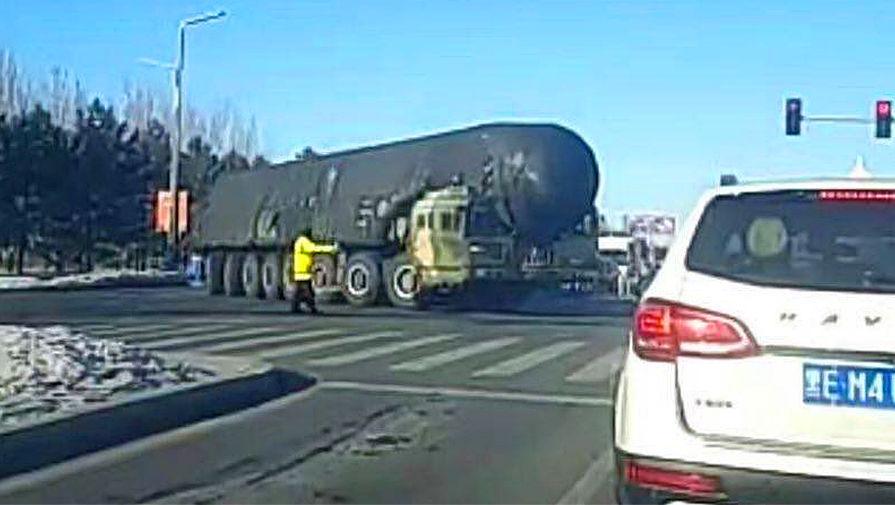 Russian press informed readers that China posted a Dongfeng-41 (DF-41) intercontinental ballistic missiles of its own production near the Russian/Chinese border. The publications stressed that the information, including photographs of the missiles, came not from Russian intelligence, but from Chinese official sources, including Global Times, daily newspaper of the Chinese Communist Party.
Global Times explained:

“Dongfeng” means in Chinese : “Wind from East”.
The Chinese move was not a surprise. On December  23, 2016 Global Times wrote:

“US President-elect Donald Trump tweeted on Thursday that the US must greatly strengthen and expand its nuclear capability, hours after Russian President Vladimir Putin vowed to strengthen Russia’s nuclear power.

“According to statistics, the US has 7,100 nuclear warheads and Russia has 7,300. Although Russia’s conventional military capabilities have fallen behind that of NATO, its nuclear arsenal has ensured its military superpower status and enabled Moscow to confront Washington in Ukraine and Syria…

“With both the US and Russia believing that their nuclear arsenals are ‘not enough,’ it’s imperative for China to speed up the development of its nuclear weapons including Dongfeng-41 missiles. We must not hesitate or be concerned about the reactions from the West. China is at the center of global geopolitics, and there is no room for hesitation on nuclear deterrence.”

Russia usually is very sensitive to any appearance of foreign military near its borders. Last year NATO made a decision to send four battalions to Poland and the Baltic countries in 2017. NATO’s battalion consist of just 300-800 men. No missiles.

Strangely enough Moscow does not perceive the development of China’s armed forces at Russian borders as a threat. Dmitry Peskov, the spokesman for the Russian president, said, commenting on the situation:

“We value our relationship with China.  We do not perceive any development of China’s armed forces as a threat to our country.”

A leading researcher at the Institute of Far Eastern Studies Vasily Kashin stated in his interview to www.gazeta.ru that in his opinion the appearance of the Chinese DF-41 effects the safety of Russia very little. Kashin said:

“For decades virtually entire Russian territory, including the main cities in the European part of the country, have been located at gunpoint of much more numerous Chinese medium-range ballistic missiles. And if we are talking about potentially dangerous for us, elements of the Chinese strategic potential, medium-range missiles are a much bigger headache. This is because production of medium-range missiles is prohibited to Moscow by the 1987 agreement with Washington.”

In spite of the fact that Chinese missiles now located specifically on Russian border, Russian official sources keep repeating that Chinese threat addressed not to Russia, but to the USA. To prove it they quote Chinese paper Global Times:

“A military clash with the US is the last thing China wants, but China’s nuclear arsenal must be able to deter the US.

“The US has not paid enough respect to China’s military. Senior US officials of the Asia-Pacific command frequently show their intention to flex their muscles with arrogance. The Trump team also took a flippant attitude toward China’s core interests after Trump’s election win. Enhancing communication and mutual understanding is not enough. China must procure a level of strategic military strength that will force the US to respect it.”

Almost all representatives of the anti-Putin opposition, from extremely nationalistic to democratic, don’t share government’s optimism.

Here is a typical statement of a nationalist Alexander Aladin (www.resistance88.com):

“Vladimir Putin tells us that Russia should not fear China, that rumors that the day will come when China’s multi-million army will take vast areas of our Far East are greatly exaggerated.

“But our Russian analysts and scientists believe differently. They sound an alarm, calling all to listen to their warnings of impending danger from China. Here is what the deputy director of the Institute of Political and Military Analysis, said: ‘If Russia will ever experience again a large-scale military aggression, with a probability of 95% (if not 99.99%), China will be the aggressor.’”

So, why does Putin try to avoid discussing these real problems? Many commentators believe that the US and EU, opposing with sanctions the annexation of Crimea and the Russian involvement in Ukraine, didn’t leave Putin any choice but searching economical support of China.

One of the most prominent Russian democratic opposition journalists Vitaliy Portnikov wrote in the Ukrainian website www.Newsonline24:

“The confrontation with China is the main request of Trump voters. Not those voters, of course, who believe in the ability of the former construction magnate to perform economic miracles and bring them jobs. But the representatives of big business, who believe that China has become the serious economic threat to the United States …

“Putin is in the most difficult situation. Both Washington and Beijing will require support from the Russian president. Russian President does not want to increase further confrontation with the West, and he cannot afford a confrontation with China. In fact, it’s a dead end.

“There are not so many options. If Putin will choose China and will try to maneuver, for Trump Russian European borders will become borders with China and the Americans will do everything to strengthen them. If Putin chooses the US side, China will strengthen the border with Russia… In this case Russia will need to ignore the Donbass and the  US will need to close its eyes to annexation of Crimea. But I think, the Russian choice of the United States is almost unbelievable. Russia does not have the possibility to choose the United States in the conflict between Washington and Beijing.

“If WWIII will really start, it will not be a clash of the West and Russia. This will be the US and China clash. Election of Donald Trump, has made such an impact quite possible.”

The idea that the beginning of WWIII is close is very popular in Russian media. The last warning, according to Russian papers, was made by Mikhail Gorbachev. The papers claim that looking at both Vladimir Putin and Donald Trump, Mikhail Gorbachev said: “It all looks like the world is preparing for war.”