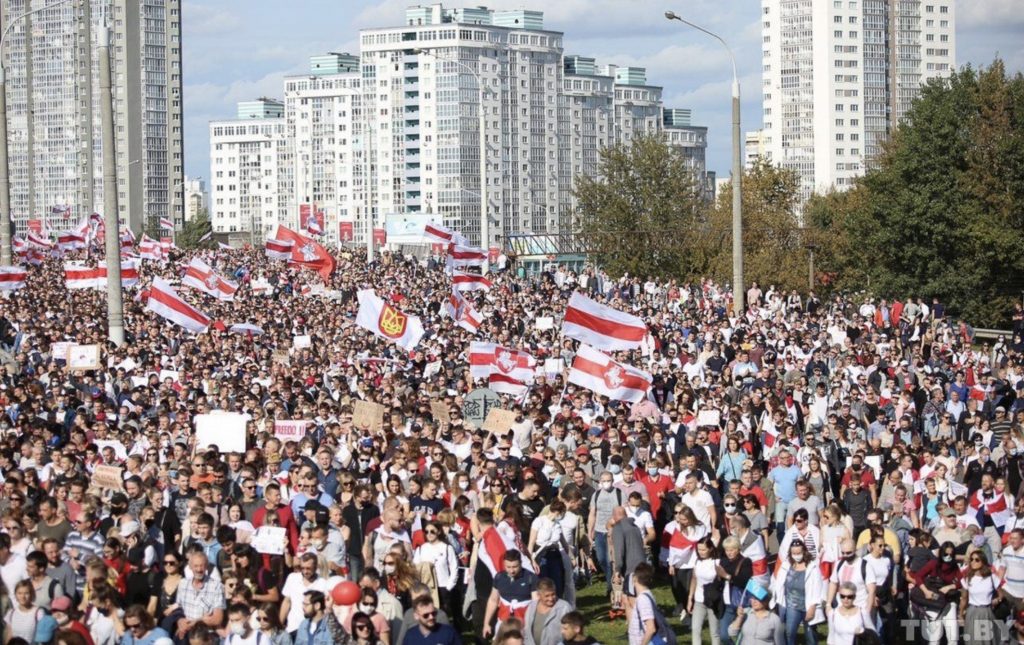 Mass demonstrations in Belarus, a country of 9.5 million, which started immediately after the August 9 President elections, continues to this day. Over the course of the month and a half, the protests have many times confirmed their mass character. In Minsk, the capital of the republic alone, more than 200 thousand people gathered in the streets on one day, which became an absolute record for the state.

Considering that about 2 million people living in Minsk, it turns out that a tenth of the city’s residents took part in the action. For comparison, in New York, 800 thousand people would have taken part in such a demonstration.

American media is sufficiently covering the events in Belarus. Still, as a person who grew up in the Soviet Union, a lot of the details of the events, not necessarily found important by the American media, appear completely unexpected and unbelievably exciting. I’d like to share with you some information about these details.

But first is a short introduction, describing the basics of the story. Alexander Lukashenka, called by many “the last European dictator”, has ruled Belarus for 26 years but has never faced protests of this magnitude before. For years he was eliminating all possible rivals and oppositionists, assassinating or putting some in prison, expelling others from the country.

Prior to August 9 elections, three young women unexpectedly have become the main representatives and symbols of the opposition. They were connected to three presidential candidates, not permitted by Lukashenka to take place in the election. 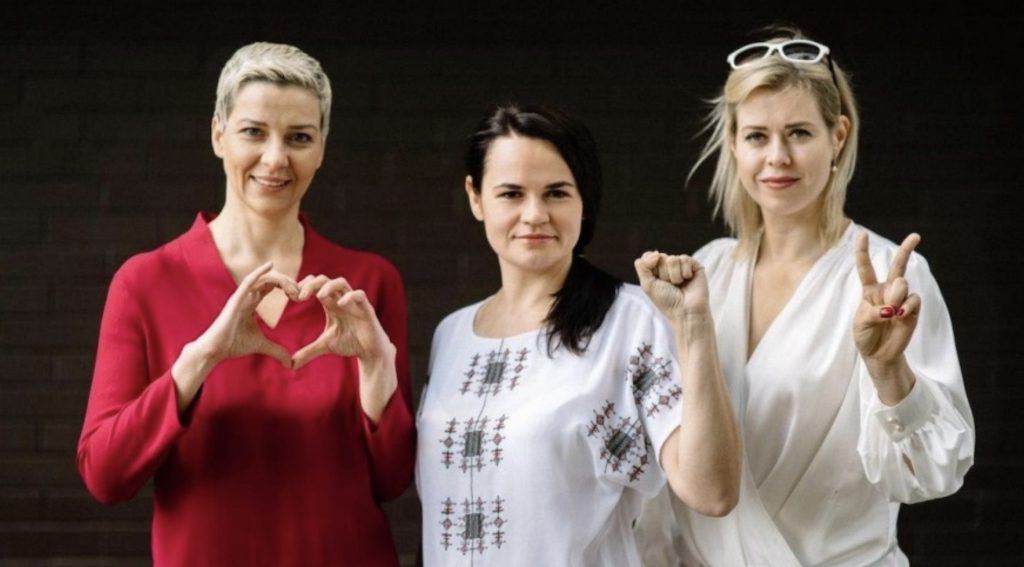 Veronika Tsepkalo (right) is the wife of Valery Tsepkalo, who fled Belarus out of fear of being arrested after being ousted from the election. Maria Kolesnikova (left) is the campaign manager of Viktor Babariko, who was stopped from registering as a candidate after being arrested on charges of bribery. Svetlana Tikhanovsky (pictured, center) is the wife of well-known blogger Sergei Tikhanovsky, who has been unable to run in the election after being detained in May on charges of attacking a police officer.

The three women decided that Svetlana Tikhanovsky should run in place of her husband. Lukashenka, being a male chauvinist, was absolutely sure, that the Belarusians would never vote for a woman. So he permitted Svetlana to register her candidacy.

Svetlana and her two companions, declared, that they don’t want to be leaders. All they want was to take power in order to free all the political prisoners, and then in half a year to run the fair elections with participation of all existing candidates.

On August 9, thousands of Belarusians marched to vote, happily chanting anti-Lukashenka slogans, sure that dictator’s rule was finished.

But the next day they learned that, according to official data, Lukashenka won the victory with 80.1% of voters. Opposition candidate Svetlana Tikhanovsky took second place with 10.1% of the vote. At the same time, alternative exit polls showed the opposite picture – Tikhanovsky’s clear victory.

Demonstrations started immediately after the elections. Participants believe that the results of the presidential elections were falsified.

The first and main characteristic of the Belarusian protests was complete absence of violence. Demonstrators marched peacefully with smiles on their faces and flowers in their hands. The only thing they demanded was Lukashenka leaving his post.

The police answered to these peaceful protests with the extreme violence. According to independent media, from August 9 to 12, about 7 thousand people were detained throughout the republic. In addition to activists, many journalists were imprisoned. The detained had been severely beaten, tortured and raped.

Demonstrations still kept their extremely peaceful character. During the month and a half of the protests, the only window, which was broken, was not broken by the protesters. It was broken by the police, who tried to beat up the demonstrators, hiding in a small café. Next day protestors helped the café owner to fix the window and for several days lines of people tried to get into the café to spend money to support the owner.

Russian media was jokingly discussing the fact that Belarusian demonstrators, always take off their shoes when stepping on a bench to chant a slogan, or to see the direction their column of demonstrators is moving. Russians find such “fussy” behavior laughable.

When journalists ask Belarusian activists how they manage to keep protests so peaceful, they always get the same answer: Belarusians are peaceful people, nobody orders them to behave peacefully. It is their nature.

Second characteristic of the Belarusian protests is prevailing role of women.
Every Sunday hundreds thousands of protesters march in Belarusian cities. But prior to that every Saturday the protests are only by female demonstrations. 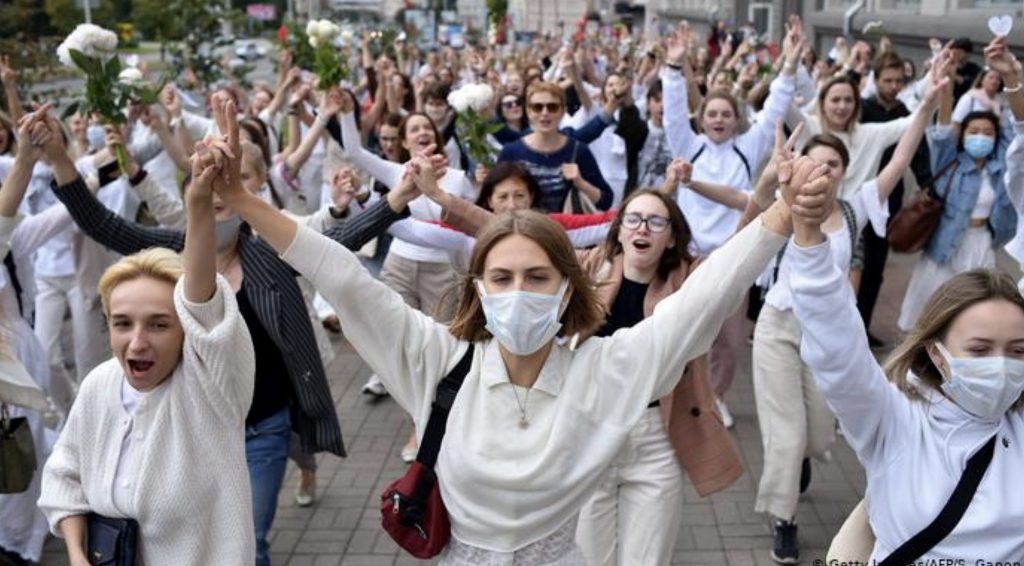 Here is the video report about this female activity, made by DW, the German public broadcast service. The report has English narration:

The third characteristic of the Belarusian protests is the lack of leaders. Nobody plans the activity and gives orders to the marching crowds. The members of the Belarus opposition established what they call the Coordination Council, not to supervise the protest activity, but just to foster a peaceful transfer of power from Lukashenka to new fairly elected president. Lukashenka immediately started arresting or forcefully pushing abroad members of the Presidium of the Coordination Council. Svetlana Tikhanovsky, who in the opinion of the protesters was the new elected president, was effectively exiled seemingly by threats to kill her children.

Finally, only two non-arrested members of the Presidium remain on the territory of Belarus: the most famous Belarusian, Nobel Prize Winner for literature Svetlana Aleksievich and one of the three women, who were at the beginning of the latest protest actions, Maria Kolesnikova. Until this year, Maria, the young composer and flutist was busy performing classical music and organizing and producing cultural projects in Germany, Belarus and across Europe. Then she became the campaign manager of the president candidate Viktor Babariko, the friend businessman, who previously financed her musical projects. Babariko was sent to prison and Maria became one of the most recognizable faces of the Belarusian Revolution. 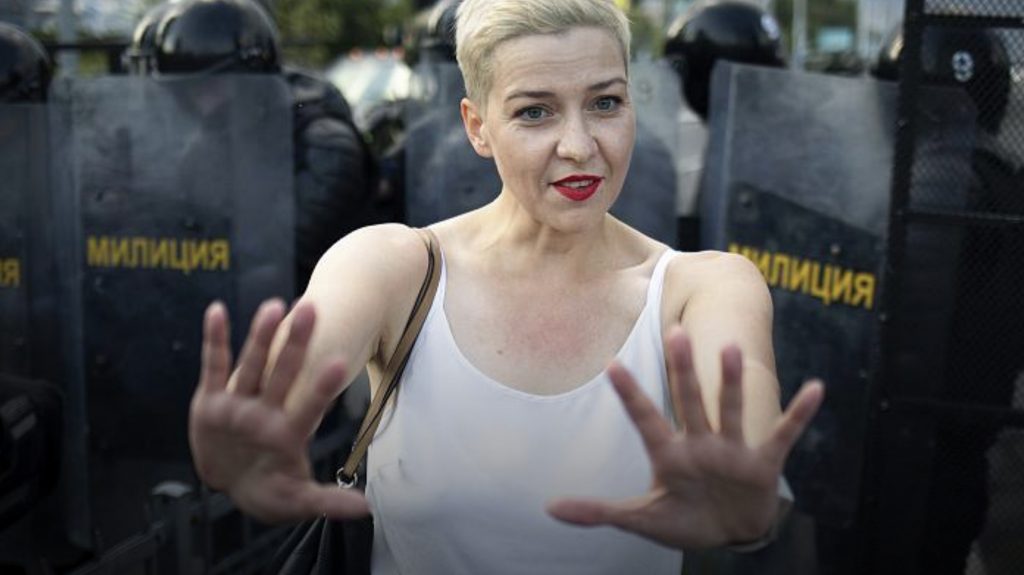 By forcing active protestors out of country, Lukashenka is trying to present them to other protestors as traitors, who prefer emigration to a dangerous fight. This way he hopes to ruin the spirit of the movement.

This strategy didn’t work with Maria Kolesnikova. After a day of interrogation involving threats to Maria’s life, the attempt was made to force her to cross the Belarusian border to Ukraine. Maria ripped up to pieces of her passport, making her emigration impossible and choosing to be arrested. She demonstrated to Belarusians that her spirit has remained unbreakable.

Next day Ambassadors of Lithuania, Germany, Poland, Sweden, Slovakia and the Czech Republic gathered at Nobel Prize Winner Svetlana Aleksievich’s home to protect her from arrest. 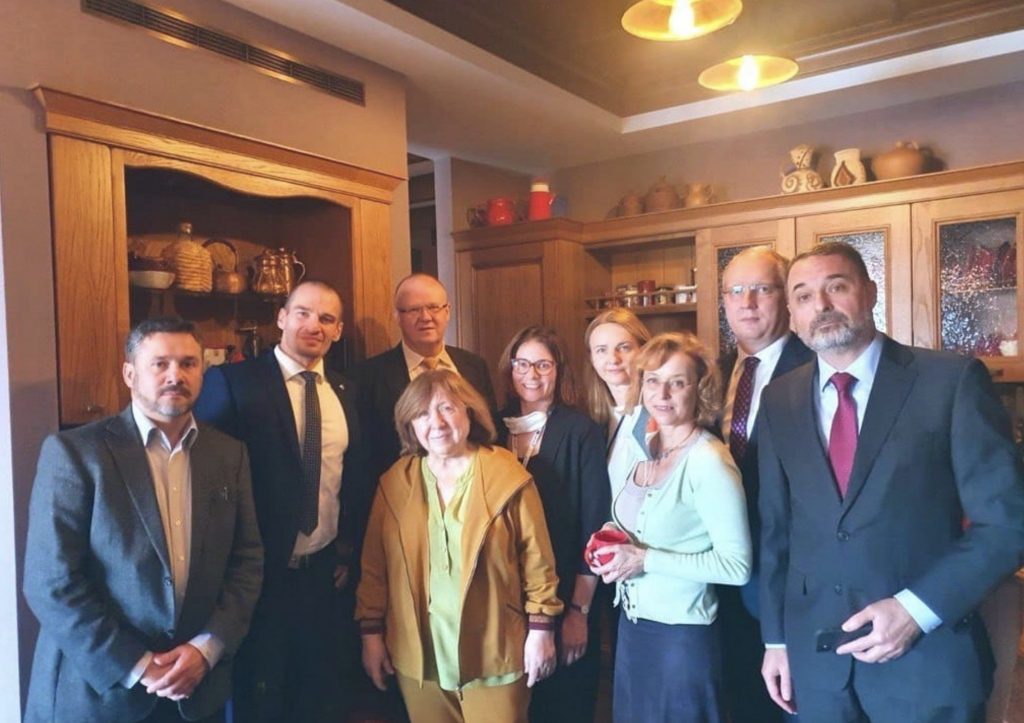 On September 17, 2020, The European Parliament (EP) adopted resolution to consider the Coordination Council of the Belarusian opposition the only “interim representation of the people” of the Republic, and called on the institutions of the European Union to assist it.

The protest activity in Belarus with the lack of noticeable leadership is going on and even growing In spite of all the Lukashenka violent actions. 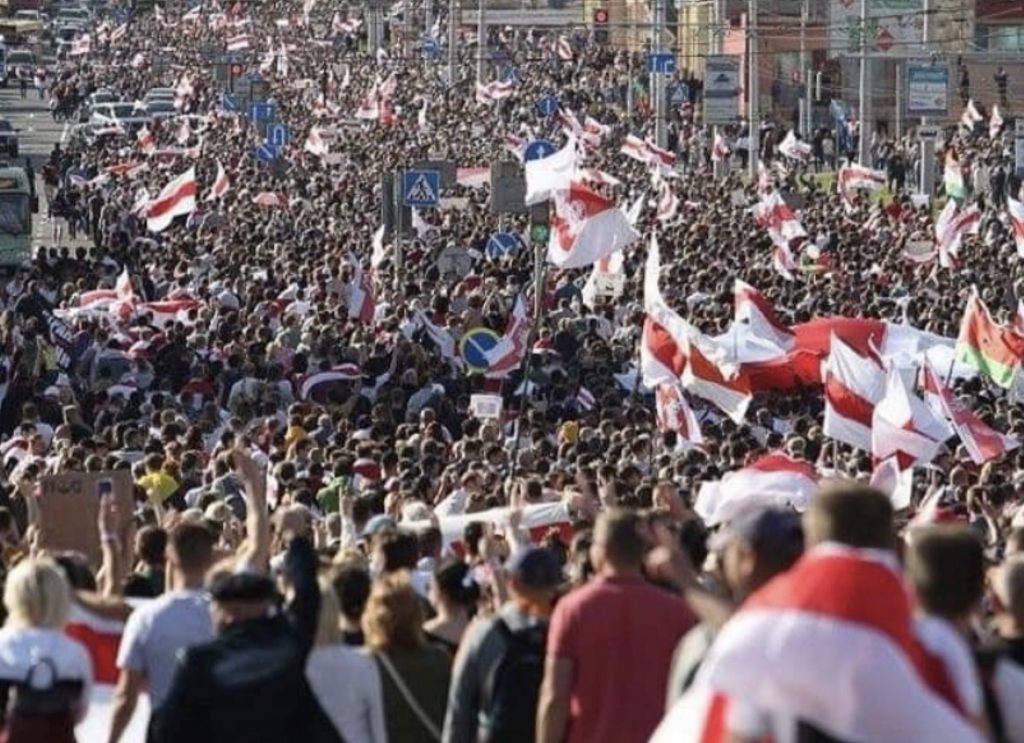 During the days of demonstrations Lukashenka blocks Internet in the whole Country. Still events on the Belarusian streets are seen on the screens of computers and TV sets all over the world and the movement of the gigantic columns of demonstrators seems to be skillfully coordinated. Usually demonstrators move on Sundays to the center of Minsk to the President’s Palace. On the past Sunday barbed wire was placed and policemen with automatic rifles waited for demonstrators over there. So the columns unexpectedly changed direction and instead marched to the fashionable district, where Lukashenka and his government’s members have their private houses.

How were protester’s movements directed?

The protesters activity is coordinated and broadcast all over the world by the Telegram Channel called Nexta, located outside of Belarus, in Poland and led by two very young Belarusian men.

Wikipedia: “Telegram is a cloud-based instant messaging, videotelephony and voice over IP service with end-to-end encryption for secret chat only. Telegram client apps are available for Android, iOS, Windows Phone, Windows, macOS and GNU/Linux and originated in Russia in 2013.”

It is technically impossible to block Telegram Channels.

Nexta is pronounced “nekhta” and means “someone” in Belarusian. It was originally a YouTube channel, which was created in 2015 by the 17-year-old high school student Stepan Svetlov, better known as Putilo.

“I just felt a desire to collect all the trash coming out of Lukashenka’s Belarus”, he said.

He began to assemble a weekly collection of news as well as he could on his own. The channel met a demand, receiving tens of thousands of views at first, then millions.

Nexta is in the global top 10 of all channels by number of subscribers. Even if, as Putilo himself believes, only about 70% of the subscribers are from Belarus, that still means that 15 percent of all the citizens of the country are watching the channel. One can literally see, live, on the channel, what is happening in real time including how fleeing protesters are chased, how they lie in wait for police.

“Every day, dozens of people write me from all walks of life, from border guards to shop clerks”, said Stepan Putilo in an interview with the Belarusian publication Tut.by.

Stepan was joined at the beginning of 2020 by Roman Protasevich, the 25-year-old chief editor of all of Nexta’s work. He, like Putilo, lives in Poland.

Nexta gets visual materials from thousands of Belarusians.

“Before the beginning of the elections, a normal day would mean we got about a thousand messages. Now we get 180 to 250 per minute. At peak times during the protests, we get up to 10 thousand messages an hour”, said Protasevich.

Nexta quickly transformed from a source of information on the protests into a coordinator of them.

They would inform protesters in real time about which underpasses they could hide from the police, or where the police were coming from.
Dozens of chats were created to coordinate things on a city-district level.
They also gave instructions on how to avoid being shot and how to resist the police.

“If we don’t do it, then nobody else will do it”, Roman Protasevich, said to explain the transformation.

TV Rain, a Russian independent television channel, re-broadcasts live important parts of Nexta. It perhaps makes the Belorussian revolution the first that can be witnessed in real time by millions in audiences all over the word. 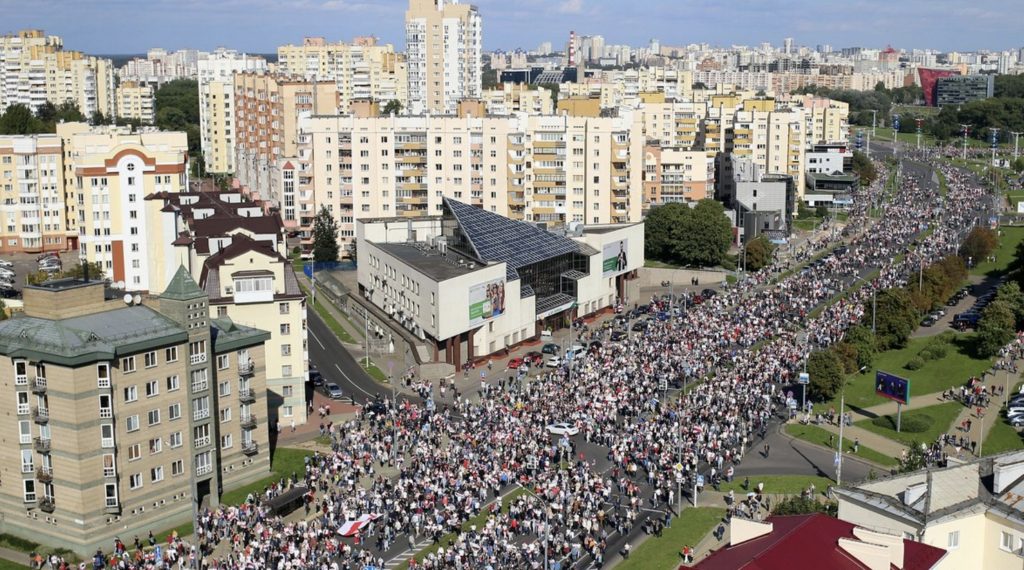