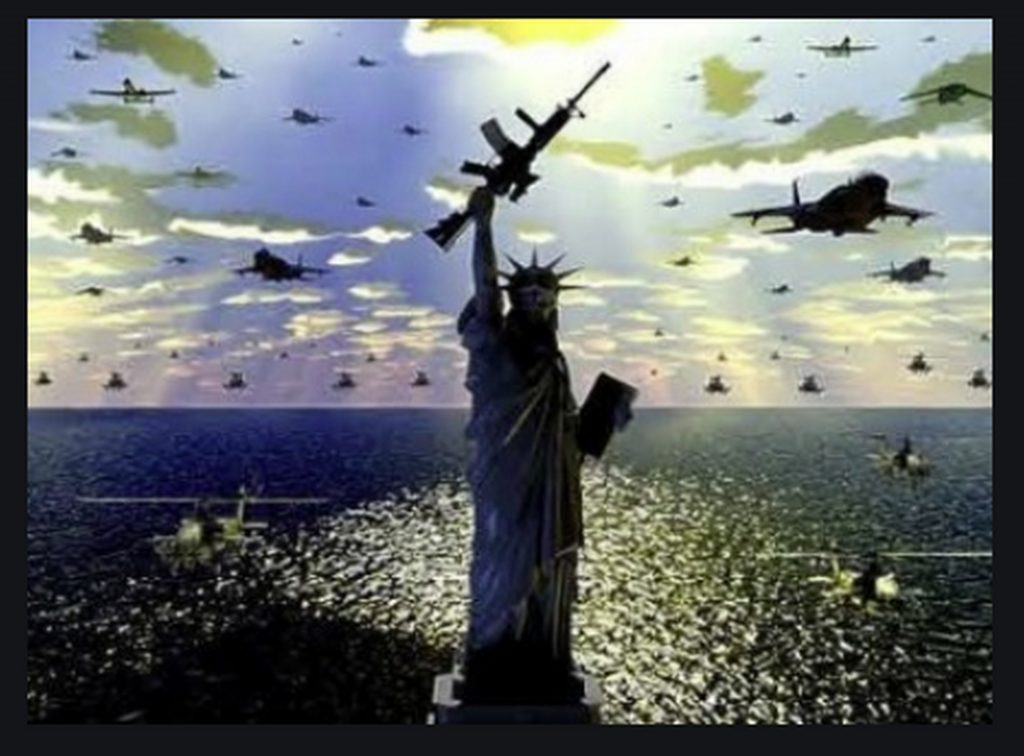 Anti-American propaganda remains one of the most noticeable subjects in Russian media.

The picture above is published by the Russian website usapress.net, which claims that it was created especially with the purpose to provide Russians with translations of authentic materials about USA, taken from American media. It  illustrates “Two centuries of wars: the American threat hangs over humanity.”

The article claims that it presents the material taken from Washington’s Blog, but provides neither a link to the source, nor any information about it. Here is a translation from Russian:

“Columnists at Washington’s Blog analyzed military statistics throughout the history of the United States and came to the disappointing conclusion that this country poses the greatest threat to peace and tranquility on the planet.

“During the 239-year existence of the United States (from 1776 to 2015),except for a period of only twenty-one years, the country’s leadership took aggressive steps to invade foreign territories and launch attacks on the enemy. Thus, the history of mankind from the late 18th to the beginning of the 21st century is characterized by many skirmishes and clashes around the world with the participation of the American army. Not a single president has yet led America exclusively in peacetime.

“Since the end of World War II, over 30 million people have died in more than two hundred conflicts, most of whom are civilians, including women, the elderly and children.”

On June 17, Rambler, one of the biggest Russian web portals and news aggregators, published an article, entitled “Counter nuclear explosion: how the US strike on the Russian Federation will end.”

“A military columnist Dmitry Litovkin informed TASS that Russia can stop the US missile raid on Moscow with the help of an on-air nuclear explosion, using the Russian superweapon named “nullifier”.

“The concept of  “Fast global strike” was created In the United States. It involves striking into any region of the world, over several hours, with subsonic cruise missiles and hypersonic devices, including six thousand Tomahawk-type missiles.

“Litovkin expressed confidence that the American raid on the capital of Russia could be stopped using an oncoming air nuclear explosion.”

Here is the screenshot, followed by a translation,  of the Tweet made by the NTV, one of the major Russian TV networks: 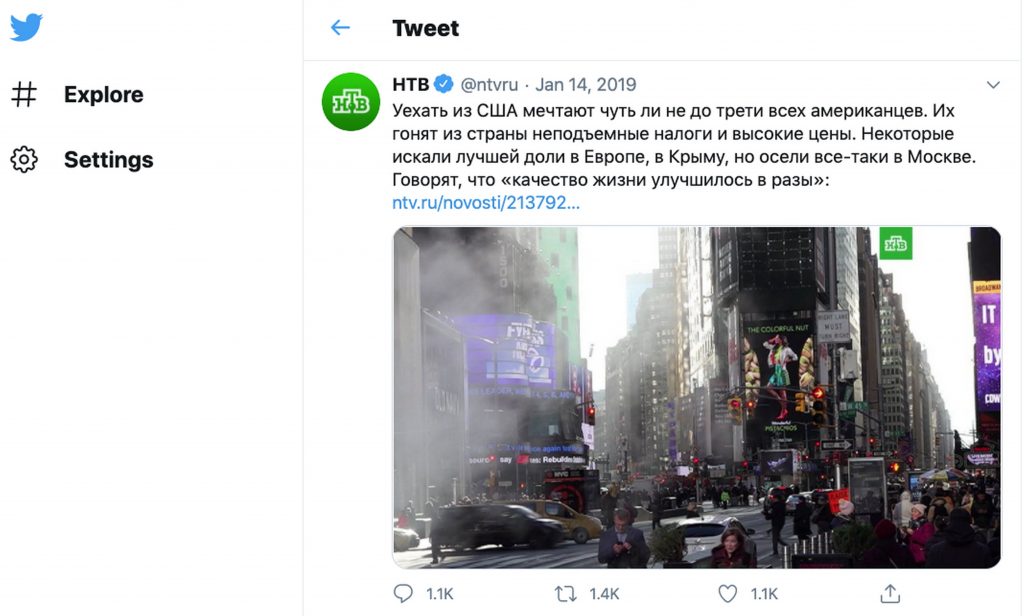 “Almost a third of all Americans dream of leaving the United States. They are seek to escape excessive taxes and high prices. Some Americans were looking in the Crimea, but most of them settled in Moscow. They say that ‘the quality of their life has improved significantly’.”

There were so many publications of this type in Russia, that oppositional Internet started publishing spoofs on such “news”. The parody shown below is a combination of a photo of Mark Zukerberg and his wife Priscilla Chan with a photo of the most prominent political commentator of Russian TV, Dmitry Kiselev and text, presented as though it were his commentary. It was reprinted by many on the Russian Internet. Judging by comments, many Russians thought that it is a real quote from TV news. 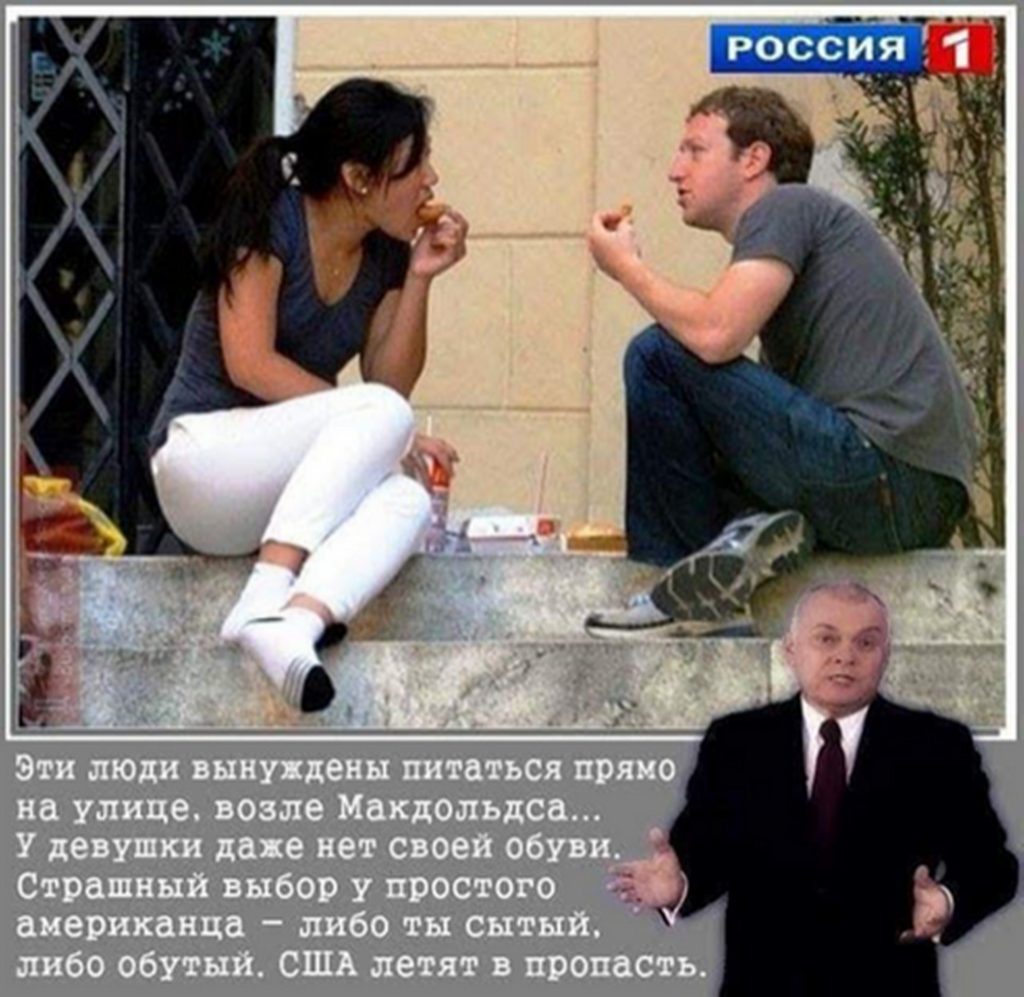 “This couple was kicked out even from McDonalds and they are forced to eat right on the street, practically from the ground. Only god knows how long they were sitting on these stones, begging for a few dollars from passers-by to satisfy their hunger at least once a day and the greed with which they eat tells us that it is not known when they will get a piece of food the next time.

“Please note that the girl does not have shoes. This is the terrible choice of an ordinary American: either you have food or shoes. Yes, our reader may have a reasonable question – why were these unfortunate people expelled from the cheapest American eatery? The fact is that racism and anti-Semitism in the USA are not just words, but a norm of life.”