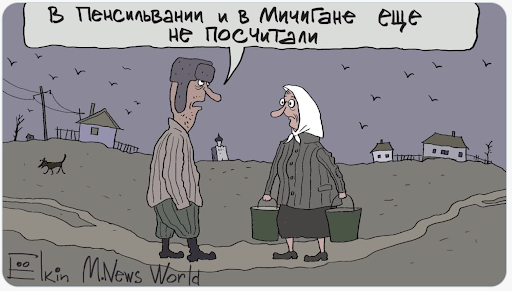 The cartoon by the  Russian cartoonist Sergey Elkin is going viral on Russian Internet. Two peasants in the Russian rural area discuss the hot news: “They didn’t count yet in Pennsylvania and Michigan.”

Journalist Oleg Kashin wrote: “The American elections in Russia are debated as their own – probably for lack of their own political struggle. They rejoice at Biden, as if it was at least Navalny who was elected president of Russia.”

Speaking of “rejoicing” Kashin meant anti–governmental Internet, which ecstatically praised America for its election process, where results are unknown to the very last moment. Alexei Navalny, opposition leader #1, said:
“Woke up to check who won on Twitter. Still unclear. Now that’s what I call elections.”

Here is how the situation was described by the political journalist Georgy Bovt in the popular site Gazeta.ru:

“What was the November 4th headline news in our media on the National Unity Day (a major contemporary Russian holiday)? Elections in the United States! The election results were followed by more than half of Russians, although according to statistics 45% of Russians do not care aboiut America. About a third of Russians have a positive attitude towards Trump, and the same number hate him. About half of Russians know who Biden is (obviously more than know names of many Russian ministers). However, according to a sweet Russian habit, a relative majority believed that the incumbent president would win. After all, if not Trump, then who?

“In social networks, passions ranged between Trumpists and Bidenists. The Russian liberals were for the Democratic Party. Russian conservatives, on the other hand, were childishly rooting for Trump as if their own ‘conservative values’ are associated with him.

“Russian liberals, having neither a US passport nor (with a few exceptions) even a residence permit in the United States, harnessed themselves to the Democrats as if they were salaried volunteers, not hiding their fierce hatred of Trump. It was as if this boor, upstart and scatterbrain ruined their own lives.”

The long uncertainty of the outcome of the American elections was interpreted by the official government controlled media not as a sign of democracy, but as a sign of chaos and collapse of the order and governmental control of the situation. Most ordinary Russians seemed to share this attitude.

A video below is going viral on Russian Internet. The group of Russians, calling themselves “Putin’s Troops”, recorded their appeal to the world:

“We are watching how elections are held in America: this is a bacchanalia!
All human rights are violated over there!

“It shouldn’t be like that in that country!! It is not an election, it is an ugly show. We, ‘Putin’s Troops’, categorically do not accept this American election!

“We, ‘Putin’s Troops’, call on the entire world community to not accept these elections!

“Thank God, we live in Russia, not in America! Thank God!”

The video is difficult to take seriously, still its message is not very different from the message of political shows of the Russian state television.

“The borders of insanity are limitless,” said political scientist Andranik Migranyan on the talk show “Big Game” on state-owned NTV.

“Each of the candidates accuses the other of stealing votes. This shows the deep crisis in the U.S.A.”

Here are some quotes from statements of some top Russian politicians.

“The election results are the worst for America. Both candidates declared victory, while Trump also claimed multiple election irregularities. This election certainly won’t have a legitimate outcome. No matter who wins in court, half of Americans won’t consider him the legitimate president.”

Gennady Zyuganov, the leader of the Communist Party faction, second largest in the Parliament of Russia:

“America is more divided than ever. The situation is extremely dangerous and the conflict will build up in my opinion, while I’m afraid anarchy will take hold in some cities, as we’ve seen.”

Sergei Mironov, the leader of the “Just Russia” party faction in the Parliament of Russia. (He was Chairman of the Federation Council, the upper house of the Russian parliament, from 2001 to 2011):

“It’s a split and I sadly think it won’t settle down for quite a while. Unlike our Foreign Ministry, I’m at liberty to pick my words. In plain Russian, one candidate is as bad as the other.

“We’re seeing something astonishing: it looks like the boomerang of so-called color revolutions that the U.S. has launched in post-Soviet countries is returning home. I believe that, after the presidential election results are finally declared, someone might want to use these homespun techniques of color revolutions at home in the U.S.”

On November 11, a popular Russian news aggregator Rambler reported that “The Norwegian sociologist Johan Galtung, who predicted in 1980 the collapse of the USSR, made a prediction about the collapse of the United States: in his opinion, this process will begin in 2020 and end in 2025.”

I found the source of the information reported by Rambler. The Galtung’s article “On the coming decline and fall of the US Empire” was published 10/23/2020 by The Transnational. The publishers informed readers that the article was written in 2015.