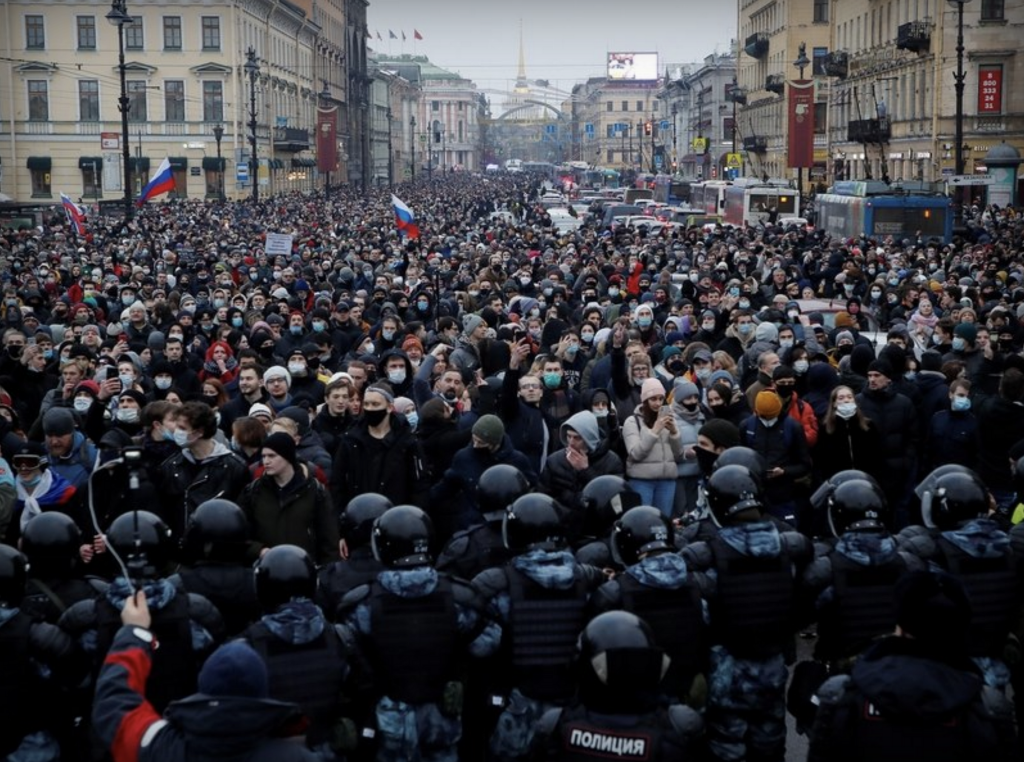 On April 26, 2021, state prosecutors in Moscow ordered all groups supporting Alexei Navalnyto immediately stop their activities. It seemed the government is starting a campaign aimed at eliminating all forms of protest movements in Russia.

According to Wikipedia, “Alexei Navalny (age 44 years) is a Russian opposition leader, lawyer, and anti-corruption activist. He came to international prominence by organizing anti-government demonstrations and running for office to advocate reforms against corruption in Russia, and against President Vladimir Putin and his government. Navalny has been described as ‘the man Vladimir Putin fears most’ by The Wall Street Journal.”

Navalny is the leader of the Russia of the Future party and the founder of the Anti-Corruption Foundation (FBK), an organization regularly publishing on YouTube videos exposing Russian government corruption.

In 2019, according to surveys of Russian sociologists, Navalny’s activities were approved by 9% of respondents, 25% did not approve, and 31% said they knew nothing about his activities.

A year later, in September 2020, a survey by the Levada Center showed that Navalny’s popularity had doubled. Twenty percent of Russians approved of Navalny’s activities, and 50% did not approve. Eighteen percent said they had never heard of such a person.

Navalny spent five months recuperating from a coma in Germany. Yet despite being threatened with immediate arrest upon arrival back in Russia and before completing his medical rehabilitation, Navalny rushed back to his homeland to continue the fight against Putin.

On January 17, immediately after his flight from Berlin landed in Moscow, he was arrested and then sentenced to at least 2.5 years in prison.

On January 19, on the second day after Navalny’s arrival and arrest, his Anti-Corruption Foundation (FBK) published on YouTube an investigation documentary “Palace for Putin. The Story of the Biggest Bribe” with accusations of corruption by Russian President Vladimir Putin.

The film gained its first million views 55 minutes after publication. In two hours, the video was watched 3 million times; in six hours it gained 10 million views. The final size of the audience exceeded 100 million.

Several days later, Navalny followed with the release of a video recording of Navalny’s conversation with one of the alleged perpetrators of his poisoning – it gained 26 million views.

On January 23, protests in support of Novalny were held in 198 cities of Russia and 95 cities abroad. The most massive action took place in Moscow. According to various estimates, as many as 50 thousand people took part. The second wave of protests took place on January 31 of this year with 121 actions in Russia and 65 abroad.

During the protests, several thousand people were detained and some criminal cases were initiated against the protesters. The number of detainees has become a record in recent years. According to OVD-Info ( “an independent Russian human rights media project aimed at combating political persecution.” Wikipedia), the number of those arrested on January 23 was 4,000, and 5,700 on January 31.

On February 4, Leonid Volkov, the head of the regional headquarters network, announced the suspension of mass rallies in connection with the arrests of coordinators and supporters of Navalny in the regions, as well as fears that holding rallies every week could lead to disappointment in street forms of protest. Volkov at the same time promised to resume the actions in the spring.

Later, registration began on a specially created website for everyone who would come to the next large-scale rally. Initially, it was announced that the date of the rally would be set when five hundred thousand participants were recruited. But on April 18; due to the deteriorating health of imprisoned Navalny, the refusal of the authorities to admit independent doctors to him, and his declaration of a hunger strike; Leonid Volkov announced that the rally would take place in 3 days. As a result, rallies in support of Navalny were held on April 21 in at least 109 cities of Russia, in which, according to different sources, participated 51,000 to 120,000 people. The number of detainees, according to OVD-Info, amounted to more than 1,900 people in more than 100 cities.

Meanwhile FBK released its latest video on Youtube (more than three million views in 2 days), informing its audience that today in Russia appeared a new profession: “Hating Navalny for money”.

“They are not famous, they are not talented, they are not popular. But now they are among the highest paid employees of Russian media. Their work does not require intelligence or talent, all that is required of them is to continuously lie about Navalny. For this they receive hundreds of thousands of rubles from the state.”

On April 26, 2021, state prosecutors in Moscow ordered campaign groups supporting Alexei Navalny to stop their activities. The order came as the court plans to designate the FBK and Navalny’s national network of regional offices as “extremist” organizations, putting them on par with ISIS and al-Qaeda and banning them in Russia. The members of the “extremist” groups could face lengthy prison sentences if they continue working and authorities will gain the legal power to freeze their bank accounts, forcing the network to stop campaigning or go underground.

The FBK called the move a “huge blow” and the offices said they would stop their operations immediately to protect their employees and supporters.

The wave of political repression is growing in Russia.

“The Kremlin’s repressive attack has two main objectives. First, the regime is trying to approve a final ban on freedom of assembly – the freedom of people to go to rallies and demonstrations, one of the fundamental human rights. Criminalization (equating to a criminal offense) of the constitutional right to assemble peacefully without weapons is the most important feature of a dictatorship that distinguishes it from a soft (competitive) authoritarian regime.

“The second goal of repressive escalation is to ban any legal opposition activity. This is precisely the goal pursued by the plan to recognize Navalny’s headquarters as an extremist organization. Of course, Navalny’s headquarters are not an extremist organization, but a normal, qualified political opposition, and we are talking here about the desire to criminalize any opposition activity and dissent.”